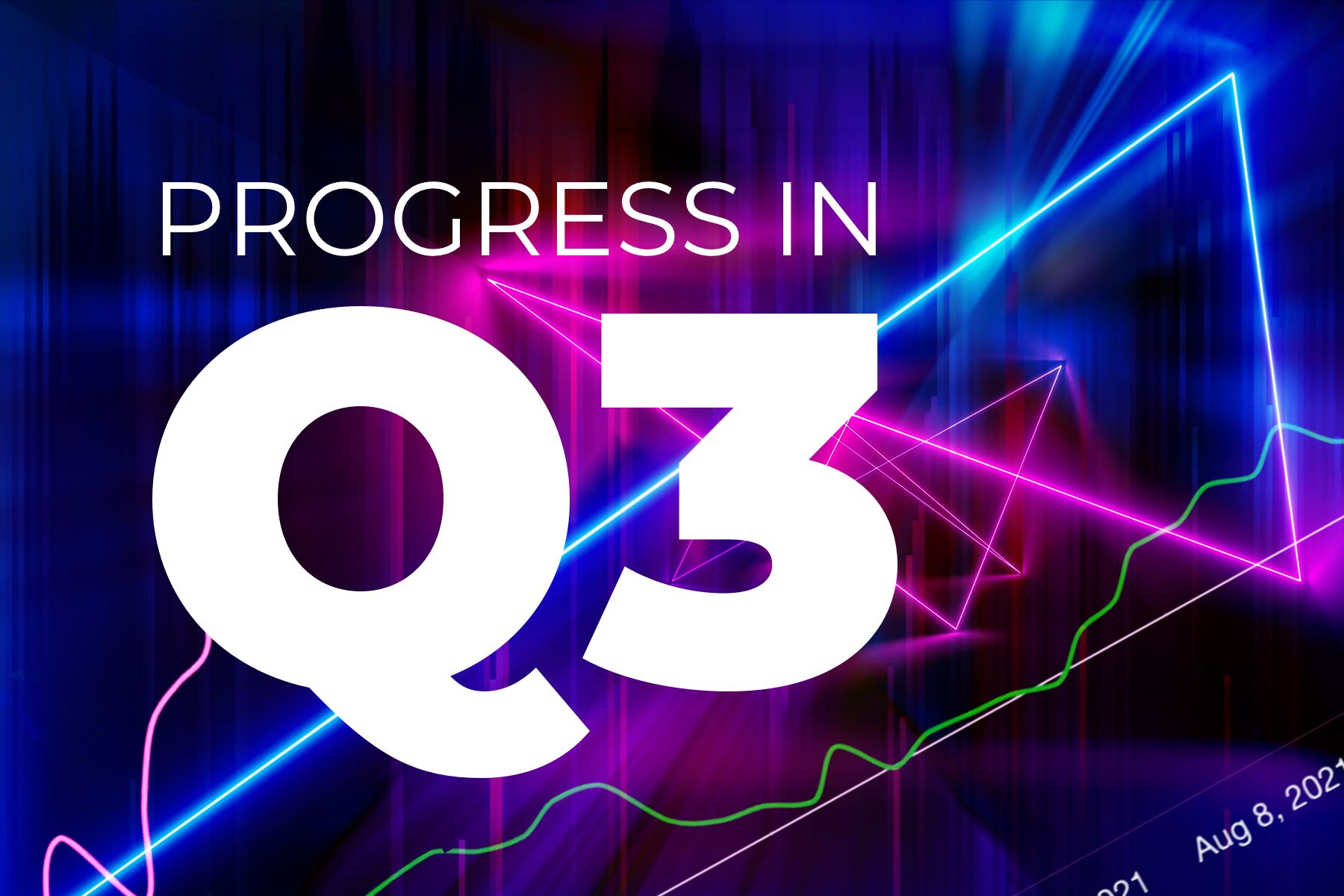 For Cindicator, the third quarter of 2021 was all about Stoic, Cindicator’s leading product, so that’s what we’ll focus on in this update. First, we’ll review the performance of Stoic’s long-only strategy, revisit the news from Q3, and will briefly outline what’s coming next.

The third quarter was good for Stoic’s strategy. As seen on the chart below, the strategy more than doubled and recouped most of the earlier losses. By the end of the quarter, the portfolio was up 430% year to date. You can always check the live performance of a demo portfolio (an actual account on Binance) after logging in at stoic.ai.

In August, the market conditions were particularly favorable. As altcoins bottomed out, Stoic’s quant algorithm was able to enter positions at discounted prices and hold them through recovery. Meanwhile, BTC was relatively stable and also trending upwards, which is usually beneficial for the rest of the crypto market.

When BTC started to correct again in September, the value of Stoic’s portfolio also declined in USDT terms. Yet once again, there were plenty of opportunities to enter new positions for the future.

Most importantly, Stoic’s portfolio is a long-term strategy. Even if the portfolio underperforms during short periods of strongly bullish BTC and ETH, it stands to benefit from a growing crypto adoption. In turn, this adoption will reflect in the prices of less capitalized assets, i.e. altcoins.

While it might seem like the train has left for crypto, it’s still very early. Lots of growth potential is still ahead, as most analysts tend to agree. In August, Cindicator’s Hybrid Intelligence made forecasts for the 2031 altcoin market cap, expecting 500% gains by 2031. Today, these targets increasingly look too conservative.

Now let’s turn back to Stoic.

Q3 was a busy period for the Cindicator team: the apps celebrated their first year, the team shipped several app updates, launched a referral program, kickstarted a marathon with $1 million prizes, and tested new strategies.

In September, Stoic apps turned one year old. In its first 12 months in the public space, Stoic went from zero to $95 million on connected user accounts. Over 10,000 users now automate their altcoin investments with Stoic.

For the fast-moving crypto industry, one year is a decent track record, which shows that the strategy can perform well in all stages of the market cycle.

The Stoic app had several updates. For example, in September, Stoic added a way to whitelist IP addresses for Binance API keys.

Whitelisting makes sure that your API key can only connect using these IP addresses. This makes your keys even more secure: even if you accidentally leak your keys, nobody would be able to use them. While whitelisting is not required, Binance has a policy of disabling API keys after 30 days if the keys don’t have that feature enabled. With the latest update, Stoic users can set up Binance keys once and forget about it.

In August, Binance also started to request intermediate verification to enable API key creation. This became a problem for users who previously used a second (unverified) account for Stoic. To solve that, the team made an arrangement with Binance to open sub-accounts for Stoic even for users who don’t qualify for the VIP level.

Lots of Stoic users were recommending the app to their friends. Now that Stoic’s referral program finally launched, users can get up to 50% off fees for referring their friends.

Separately, the Stoic team opened up its affiliate program for bloggers and influencers. It is currently available to a limited number of partners so if you’re interested in joining, you might have to bear with some delays. And as a user, you should expect to see more content about Stoic over the coming months.

A referral marathon with up to $1 million in prizes

To celebrate Stoic’s anniversary and the launch of its referral program, the team launched a marathon with up to $1 million in prizes. The more users join this competition, the higher the prize would be.

The marathon runs until the end of November, so there is still time to join for a chance to get the jackpot.

One strategy already started to onboard first users as part of an experiment. The strategy trades only BTC and is based on forecasts from SuperForecasters, the best analysts on Cindicator’s Hybrid Intelligence platform. Stay tuned for more information.

In general, any new Stoic strategies will be first available to users who are part of the Stoic Platinum program. Anyone with over $100,000 on an account connected to Stoic automatically becomes a Platinum member.

Stoic is now the main priority for the whole Cindicator team as that’s the product that found product-market fit and binds together everything that was built since the company was founded in 2015.

Over the next months, expect to see new features, app updates, experiments, contests, a new exchange, and an update about tokenomics, and more.

Once again, we’d like to thank you for supporting Stoic. If you like the app, please leave a review in Apple’s App Store or Google Play.

And if you have yet not connected Stoic, now might be a good time to try.