Cindicator: How a Crypto Tool Helped Me Make 33% in 30 days in the Stock Market 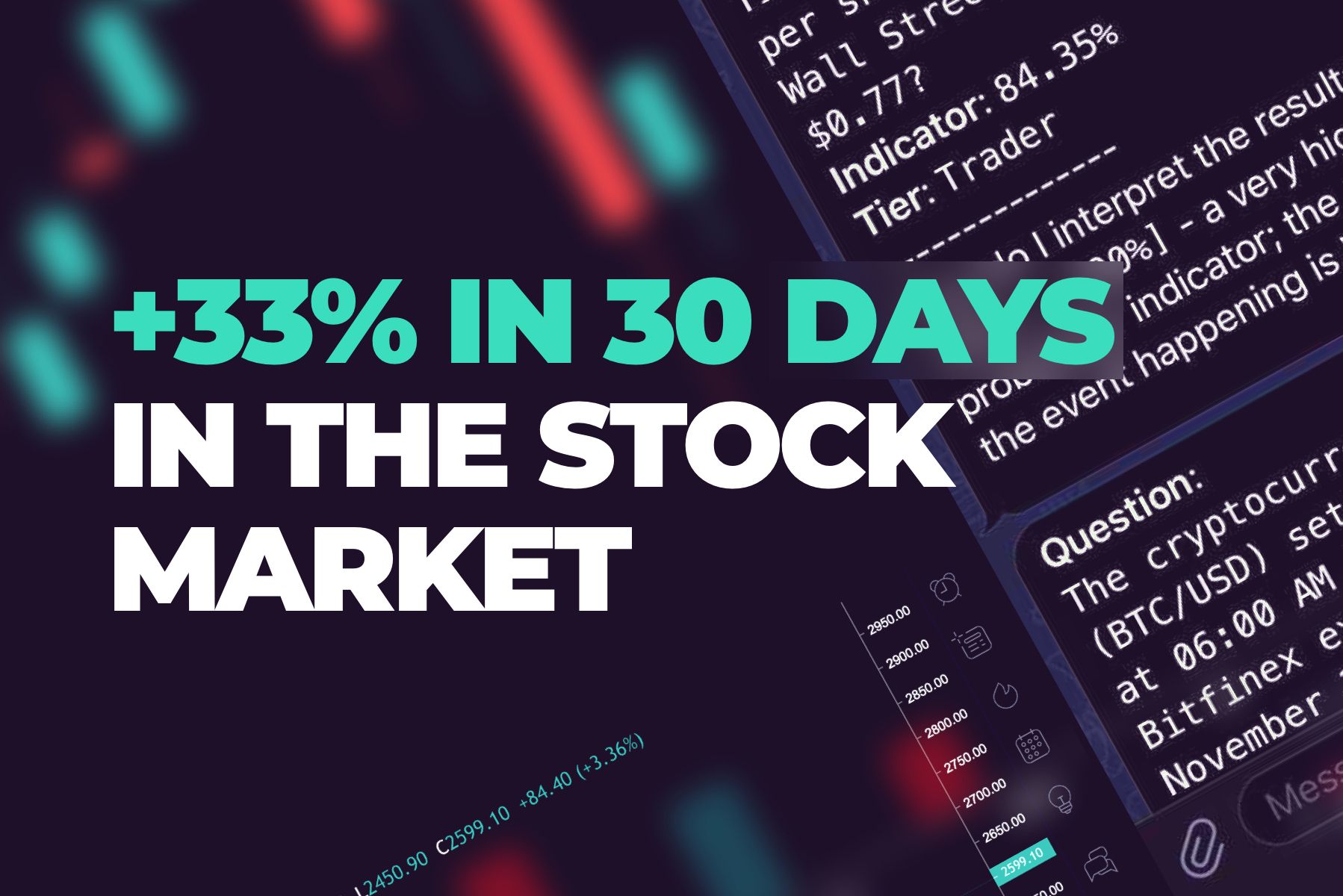 By CalvinXTZ, a Cindicator token holder

Thousands of people use Cindicator’s Hybrid Intelligence to make money with cryptocurrencies. This article explains how a trader uses Cindicator to improve his ability to make money in the world of stocks.

If you’re not familiar with Cindicator, go to cindicator.com to learn about it. In short, it is Hybrid Intelligence for effective asset management. One of the uses of Cindicator is predictions of market events, including both stocks and cryptocurrencies.

I am sharing this information because I want investors to understand and appreciate the benefit of Cindicator’s Hybrid Intelligence and to give them a straightforward strategy that one trader used to make profits in the world of stocks.

IF YOU TRY THIS STRATEGY … YOU DO SO AT YOUR OWN RISK!

This is not financial advice or a recommendation of any sort. This is a description of what one trader did to make profits. Do not attempt this strategy without understanding stocks, options and Cindicator. Seek out the advice and help of a professional financial advisor before trying this approach. There are no guarantees in trading so if you use this strategy, you do so at your own risk.

The earnings season, when public companies release their earnings, is a busy time for traders and an opportunity to make money. Each earnings report includes vital information about the company’s performance during the quarter and, more importantly, provides guidance about future performance. All of the big companies are followed by investment analysts who study every aspect of a company and provide estimates of the company’s earnings, revenues and such. When a company beats the investment analysts’ expectations, their stock is likely to go up. If they just meet estimates or disappoint with lower earnings, the stock will go down.

If an options trader has an edge during earnings season, he can improve his rate of return.

I used Cindicator’s Hybrid Intelligence to give me that edge during the earnings season at the end of 2018.

Over October and November 2018, I traded Call options based on Hybrid Intelligence for company earnings. I did 23 trades and had a ROR of 33% for those 30 days. During the same time, the S&P 500 was down 5%.

This article describes my approach developed over that period. I will provide updates as I continue the approach in January and February 2019.

What are Cindicator’s Hybrid Intelligence indicators?

Ahead of every major earnings date, Cindicator posts questions about company performances to 120,000 analysts registered on its collective intelligence platform. Here is an example of a question about earnings:

Cindicator receives responses from the 120,000 analysts and then applies several of its 30+ machine learning models and a neural network, which identifies complex nonlinear relationships between different models. The resulting indicator is immediately sent to holders of CND tokens. Earnings indicators are sent to users with access to the Explorer tier and above.

Here is how indicators look in the Telegram bot:

There are levels (or tiers) of ownership of Cindicator based on the number of CND that you own. The more CND you own, the more indicators … and types of indicators … you receive.

You can get all the details on the Cindicator website.

You need Expert level to receive enough indicators for this options strategy. It’s a small price to pay for 33% in 30 days (in my opinion, anyway).

How did Cindicator give me an edge?

The key is Cindicator’s indicator ... is there a 75% or higher likelihood that the company will beat estimates? If so, then I buy a Call. If not, then I’m sitting it out.

Traders have been trying to make money consistently based on earnings reports since the beginning of the stock market. But it’s not easy. Most companies are expected to beat estimates. In fact, the long term average of companies beating earnings estimates is 64%, according to Lipper Alpha Insight*. But history shows that you cannot make money buying Calls for every earnings report hoping that the averages will work out in your favor. You need greater certainty about whether a company will beat estimates so that you can carefully select your trades … that’s when you make money.

Cindicator gives me the advantage of knowing the improved-upon opinion of over 100,000 people who follow a particular company and have an opinion on their earnings.

And it worked in the fourth quarter of 2018. Almost 90% of Cindicator’s earnings indicators used in my trading were correct. That helped me trade profitably.

This article assumes you know how options work. You can find many excellent explanations of options on the web. In brief, Call options give you a right to buy assets at a specific price on or before a particular date. Put options work in the opposite fashion: a Put gives the owner the right to sell the stock at a specific price. You would buy a Put if you believe the stock will go down in price.

The key benefit of using options is the built-in leverage. For example, if a stock goes up by 5%, the value of a Call option might go up by 40%. Of course, this goes both ways and the losses are also multiplied.

I only used Call options in the fourth quarter 2018 earnings season. In the first quarter 2019 season, I will also use Put options (but to a lesser degree).

The options strategy for earnings indicators

I made some great trades over the 30-day trading period and also made some mistakes. The result is a strategy that I will execute in the upcoming earnings season, starting on January 15 2019. Here are some points about the strategy:

Case 1. Let's say ABC corp announces earnings on Wednesday, January 16, after the market closes. The stock is at $36.30. The CND bot provides the indicator on Monday, January 14, saying that ABC will beat the estimate. I wait till Tuesday, January 15, late in the day, to buy the ABC 35 January 18 (FRIDAY) Call.

Then I watch the stock of ABC. If it goes up prior to the earnings release (which is after market close), I will sell ½ of the position to lock in a partial profit. Then I’ll watch it after the report and sell at an appropriate time.

Case 2. Let’s say today is January 11 and I know that company XYZ announces earnings next week, on Friday, January 18, before the market opens. The CND indicator says XYZ will beat earnings expectations. The stock is trading at $93.

A key part is knowing when to close the trade.

I’ve made nice profits by closing the trade before the earnings report is released, as well as closing it shortly after the report’s release. There’s really no rule for this. I have found that taking profits early is a good idea because you never know how the market will react to a good report.

So I believe it’s a good idea to take the profits when available.

The strength of the CND indicator is key. If it’s below 65% or in the low 70s, I will not do the trade for Call options. If it’s the high 70s and above, I’ll do the trade.

I only used Call options in the fourth quarter 2018 earnings season.

In the upcoming earnings season, I will experiment with Puts based on indicators that are very low strength. For example, the indicator strength has to be below 50% of something like that. The level of strength for a Put trade is to be determined.

To recap the rules that emerged from the prior earnings season:

For the upcoming earnings season, I will modify that approach a little bit if I’m using a Put option. And I will experiment with expiration dates as well.

We will see what happens.

In total I executed Call options on 23 of the earnings reports and avoided trades for five reports. Of the 23 trades:

The linked file provides a summary and further detail.

If you have any questions, I’ll be around to answer those in the Cindicator chat on Telegram.