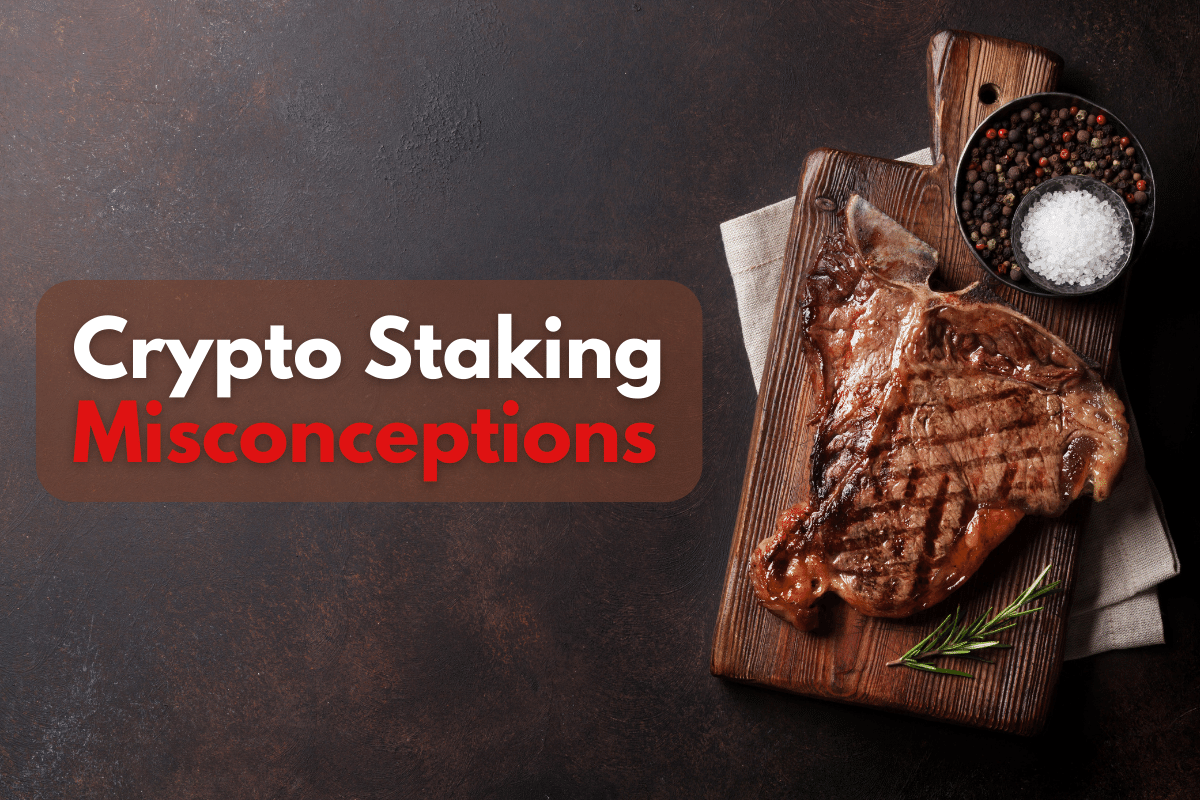 The world of blockchain and cryptocurrencies is rapidly changing from day to day and month to month. Back in 2009, Bitcoin was the one and only cryptocurrency with its own complexity and intricacies built into the code itself.

As time progressed, more cryptos were born, bringing forth a thriving ecosystem full of coins, tokens, NFTs, and everything in-between. With the dawn of Peercoin back in 2012, the concept now known as “staking”, was first introduced.

Many new investors have questions and common misconceptions when it comes to staking. As referred to in an article inside Cindicator’s DeFi Academy, staking is a way to secure and validate a proof-of-stake network such as Cardano, Monero, or Algorand.

Regular, everyday retail investors in a particular crypto can participate in network validation and governance simply by delegating a portion, or all of their holdings, towards a network validator (normally completed in a mobile or web-based wallet app). Those tokens are now officially staked on that blockchain network.

A common notion among many new crypto investors is that staking is sketchy, or not legit. Normally, this type of thinking stems from a lack of information or a lack experience in staking. Either that, or someone did indeed stake their tokens, only later to have that validator stop working or perhaps leave the network, taking the stacks of staked tokens along with them.

The fact is the majority of validators have a vested interest in the success of the network that they are a part of. It is not in their best interest to stop validating transactions or to stop securing the network as that would jeopardize not only their holdings, but potentially have a negative affect on the value of the tokens themselves.

Staking is actually one of the better forms of passive income ever since proof-of-work mining became less and less profitable due to difficulty levels and energy costs. The barrier to entry is low with staking and it is also environmentally friendly.

Misconception #2 - Staking is Too Risky

“If I stake, I am taking a risk” is a collective thought among newer investors, and even some who have been in the space for a year or longer.

The truth of the matter is any type of financial investment comes with some form of risk. If people are investing their fiat money into crypto assets, then they must already have a higher-than-average risk tolerance than most. Therefore, right out of the gate, crypto investing can be risky.

With that said... is staking risky? It depends on who you ask. Those who are more familiar with staking and have experience delegating their tokens to a validator and earning rewards on that delegation will tell you how much they enjoy staking and how it adds value to their overall portfolio. A non-experienced person will generally err on the side of caution, peering into the staking window but not crawling through it.

The majority of crypto holders will exclaim that staking is a great way to earn passive income and also contribute to the health of a particular blockchain network, as one would be participating in the overall growth of Web 3.0.

Misconception #3 - Staking is Too Complicated

Again, for new investors who are unfamiliar with the space will claim that staking is too complicated or difficult to learn. There are a myriad of documents, videos, and other resources available to those who want to get involved in staking.

In fact, exchanges make it quite easy to stake. For instance, Coinbase will automatically begin staking Algorand or other coins as soon as they land in your wallet. Staking can also be completed through self-custody in hot or cold wallet apps. Normally, there is a big option on the side of apps that will be labeled “staking”.

Staking can be complicated for those who are unwilling to keep an open mind. Oftentimes, mindset is one of the main factors when it comes to the success or failure of a particular goal or action. First correct your thoughts, then unlock the myriad of possibilities that come afterwards in crypto and life in general.

Misconception #4 - Staking Does Not Earn Much

The idea that staking does not earn much can prove true or false depending on how you look at it. Some staking protocols only offer small APY of 1% or 2%, while others offer upwards of 5% or more.

If you are looking to receive the highest return possible from a given platform, then do some research on the protocols that offer the highest staking rewards. Is it Algorand, Cardano, Cosmos? The following Tweet from @cryptodiffer displays a helpful chart with the most popular staking providers by number of users.

My Funds Get Locked Up

Though it is true that some staking protocols lock your funds for an unknown time frame (Ethereum), many of them have what is called a “cool down” period. For instance, those who stake their tokens on the Akash Network, there is a 21-day cool down period where your staked tokens need a few weeks to “detach” from one or more validators.

The cool down periods also cut down on possible hackers acting maliciously. Many of the rules set in place by these proof-of-stake networks are there to prevent the network from failing in some way, and also to protect user’s funds.

Do some networks “lock” staked tokens for an undesignated period of time? In a small handful of cases, yes. In many other cases, no. Many investors want to remain in clear control of their assets, which is quite understandable. Staking allows users to remove as much staking delegation as they want to and do it whenever they please.

As experienced investors in the cryptocurrency space, we can honestly say that the common crypto staking misconceptions have been busted. In other words, the false or inaccurate views about staking have been put to rest and replaced with how staking is an innovative, efficient way to participate in a given blockchain network without purchasing expensive equipment or paying high electricity costs.

In addition, staking is environmentally friendly, which is why certain blockchains have moved from proof-of-work mining to proof-of-stake consensus mechanisms. Staking plays a major role in decentralized finance (DeFi) along with lending, borrowing, and trading on decentralized exchanges.

Thank you for tuning in to today's episode and as always...

What is Staking?
Is Crypto Mining Still Profitable?
Cindicator Spotlight: Who is Cindicator?