Cryptocurrency: The Ultimate Asset Class of the 21st Century 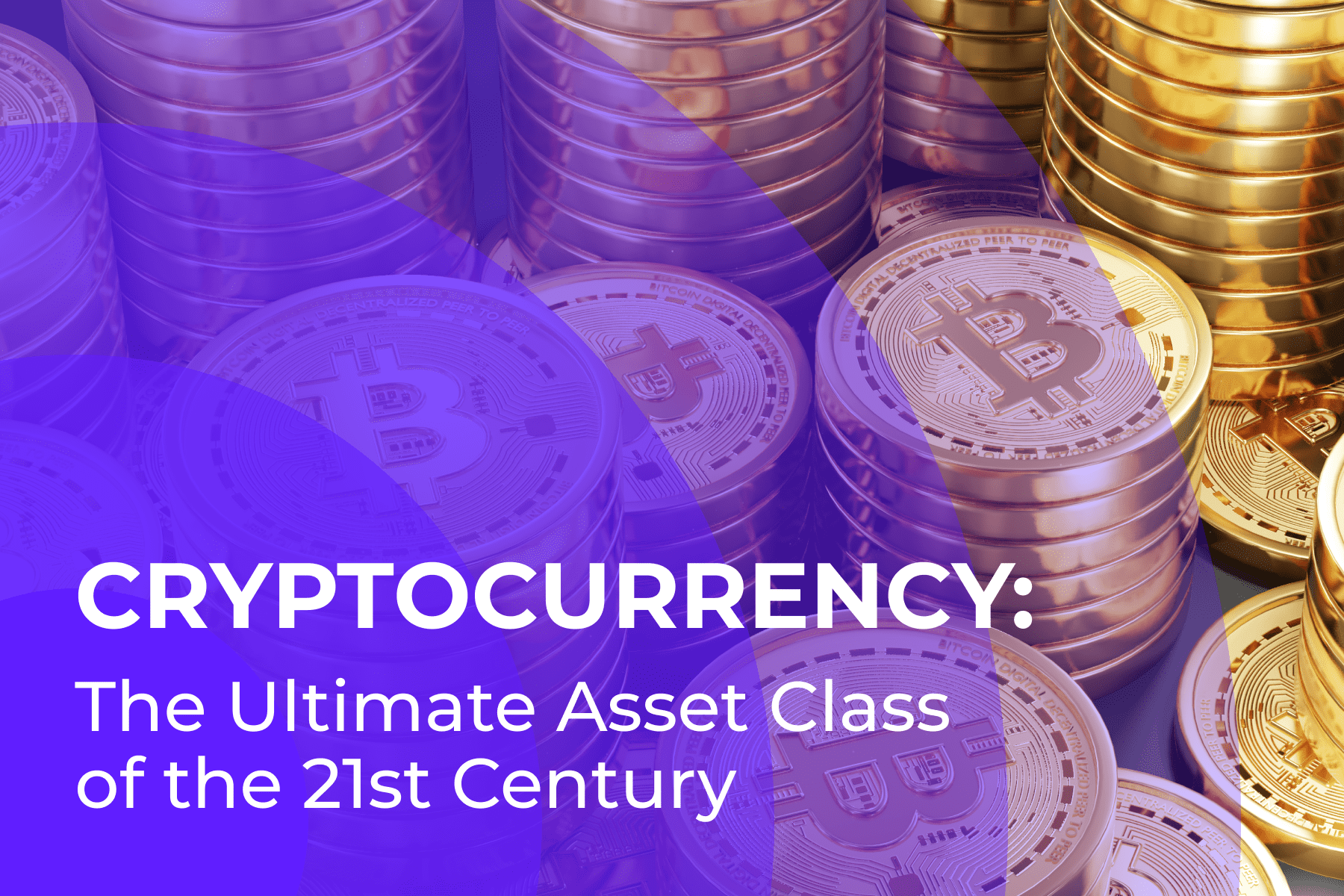 Money, the medium in which we transact to exchange goods and services, has dramatically evolved throughout history. The barter system was used to trade one item for another before the use of gold and silver. Precious metals were and still are seen as valuable due to their rarity in addition to the expense-driven mining process. After citizens got tired of carrying physical gold in their pockets, the move to paper money backed by gold was seen as permissible and passed as legitimate currency.

What happened next? More evolution occurred as checks were written to represent cash stationed inside a bank account on a centralized, digital ledger. Checks, being a slow and petty payment method by nature, ushered in the era of plastic credit and debit cards. Swiping became the norm which worked for convenience’s sake, but then aided consumers in acquiring mounting levels of debt each with over-the-top interest rates.

Money has changed form over time and is now almost completely digital. Cash has become increasingly frustrating to shuffle around as opposed to whipping out a credit or debit card at the local gas pump. Even Apple Pay and Google Pay have made payments simplistic for the everyday mobile user. Not to mention, paper cash is meticulously dirty and could be host to a multitude of bacteria, furthering the spread of harmful illness or diseases. The growing supply of cash is often seen as a disadvantage creating astonishing inflation rates.

As the internet became more trusted, the introduction of 3rd-party services such as PayPal, Zelle, and Venmo became a great way to transact funds in a safe, secure manner. Fast forward to current day 2022 where cryptocurrencies have now been around for 13 years, a relatively brief amount of time. Cryptocurrencies, or crypto for short, is not only the next evolution in money, but the next evolution in known asset classes.

Stocks, bonds, real estate, commodities, and futures make up the majority of existing investment vehicles worldwide. With the introduction of crypto in 2009 where Bitcoin served as the first iteration to employ a cryptographic, peer-to-peer digital payment system, we have officially stepped into an entirely new, rare, and exciting industry that is quickly taking the world by storm.

Cryptocurrency was born on the internet, for the internet. We can view it as an alternative form of currency that works independently of any central authority. Traditional forms of money, such as cash and checks, were created to work well in offline settings, yet are not fitting with today’s tech-driven devices such as cell phones, PC’s, tablets, and IoT gadgets. Imagine for a moment, sitting inside of a new Tesla vehicle and having to insert cash into the dashboard to pay for an app.

We are living in highly advanced times as the birth of the metaverse utilizes virtual and augmented reality to merge the physical world with the virtual world to create rich, immersive experiences like we’ve never witnessed in all of history. Everything and anything are becoming digital with the minting of NFT’s, or non-fungible tokens that represent physical assets and secured on the blockchain. The payment rails are being restructured to fit within these virtual spaces where humans will be existing.

Consider for a moment the introduction of the automobile back when there were no concrete roads to drive them on, only dirt. Horses were the primary means of travel in those days. Imagine riding your horse on a dirt road, then along comes a motorized vehicle zooming by flinging mud in your face at top speeds. The transportation rails, or concrete roads, had to be rebuilt, or restructured, to allow for the innovative, efficient automobile to take precedence over horse-bound travel. Creating a new system from the ground up wasn’t easy, especially when many did not see the value right away in owning a vehicle as they were expensive, loud, and not efficient on gas mileage.

A New Industry Was Born

Cryptocurrencies are not only used as a means of value transfer, aka money, but the underlying tech can and is being used to spur an entirely new industry known as decentralized finance, or DeFi.  With the imminent growth of the DeFi industry comes the ability to manage, store, trade, and stake your digital currencies utilizing blockchain technology, completely independent of national authorities such as banks or 3rd party brokers.

The rise of Ethereum in 2015 opened the floodgates to programmable code where if/then statements called smart contracts could be created and executed by one or more parties. Ethereum developers built a network using the same consensus mechanism as Bitcoin yet allowed for the creation of dApps and tokens, and other programmable assets. Even though this did cause some network slowdowns and higher than expected gas fees on transactions, Ethereum is one of the most popular and exciting networks to be involved with in 2022 and beyond.

Remember those dirt roads our horses were trotting on earlier? The dirt represents old asset classes such as stocks and bonds we still hang onto currently as we transition to the faster, sleeker, more efficient rails of blockchain and crypto technologies. The main premise of cash still exists as crypto is readily used as a medium of exchange yet executed at a much higher level without the need to rely on centralized agencies for trust and transaction finality.

The cryptocurrency asset class now consists of thousands of tokens, currently sitting at close to a $1T market cap. Back in 2009, Bitcoin was the sole crypto, each one only costing pennies on the dollar and easily minable with a laptop computer. Today, entire facilities are dedicated to running thousands of specialized power computers working to secure the network, ensuring the legitimacy of each signed transaction. Traditional finance companies, such as Goldman Sachs and Robinhood, now realize the power and potential in this new industry and have positioned themselves strategically inside the market.

The Future of Cryptocurrency in the 21st Century

The future of crypto looks bright in the coming years. The market does indeed experience swings as does any financial market. Crypto is not immune to downturns where investors could potentially lose their money if they are not wise in their choices. Risk is a big aspect of investing and must be considered before placing hard-earned money into a new asset class such as cryptocurrency. Certain investment vehicles such as lending protocols, or Stoic AI’s Fixed Income strategy, are seen as less volatile than others on the market.

Many entering the crypto space have not yet mastered the art of trading assets on exchange which is why automated services such as Stoic AI manage crypto portfolios 24/7, taking advantage of volatility in the market. In traditional finance, an investment advisor typically manages your account and trades stocks on your behalf. With crypto, these types of services can actively run on your behalf even while you are fast asleep.

Cryptocurrency is becoming more popular as various applications make access and usability easier for the average consumer. For instance, Solana just introduced the release of their new crypto mobile phone with a built-in wallet and dApp/NFT store. Entire ecosystems are being built around fascinating ideas and concepts brought to life through the inner workings of blockchain and cryptocurrency.

As institutional interest and funding cause the crypto space to expand, immense innovation will penetrate industries such as gaming, finance, music, and art, enabling users to earn, collect, and swap tokens while performing activities they enjoy. The emergence of AI, VR, and AR will spark entirely new ways to utilize cryptocurrencies that have not been conceptualized yet. Developers are hard at work building the future of the internet known as Web 3.0, allowing users to take back control of their assets and data instead of large corporations.

Cryptocurrency may not simply be the ultimate asset class of the 21st century, but the greatest asset class of all time. The digital age we live in and continue to push the boundaries of, could very well become the greatest opportunity the world has ever witnessed. Clearly, the crypto space is still relatively new, boasting a penetration rate of roughly 5% of the global population, yet has made significant progress in that short span of time due to advances in technology and the overarching need for a shift in how finances are handled. The latest evolution in money is here… the next steps are up to you.

Information in the article does not, nor does it purport to, constitute any form of professional investment advice, recommendation or independent analysis.