How to read price action in cryptocurrency markets 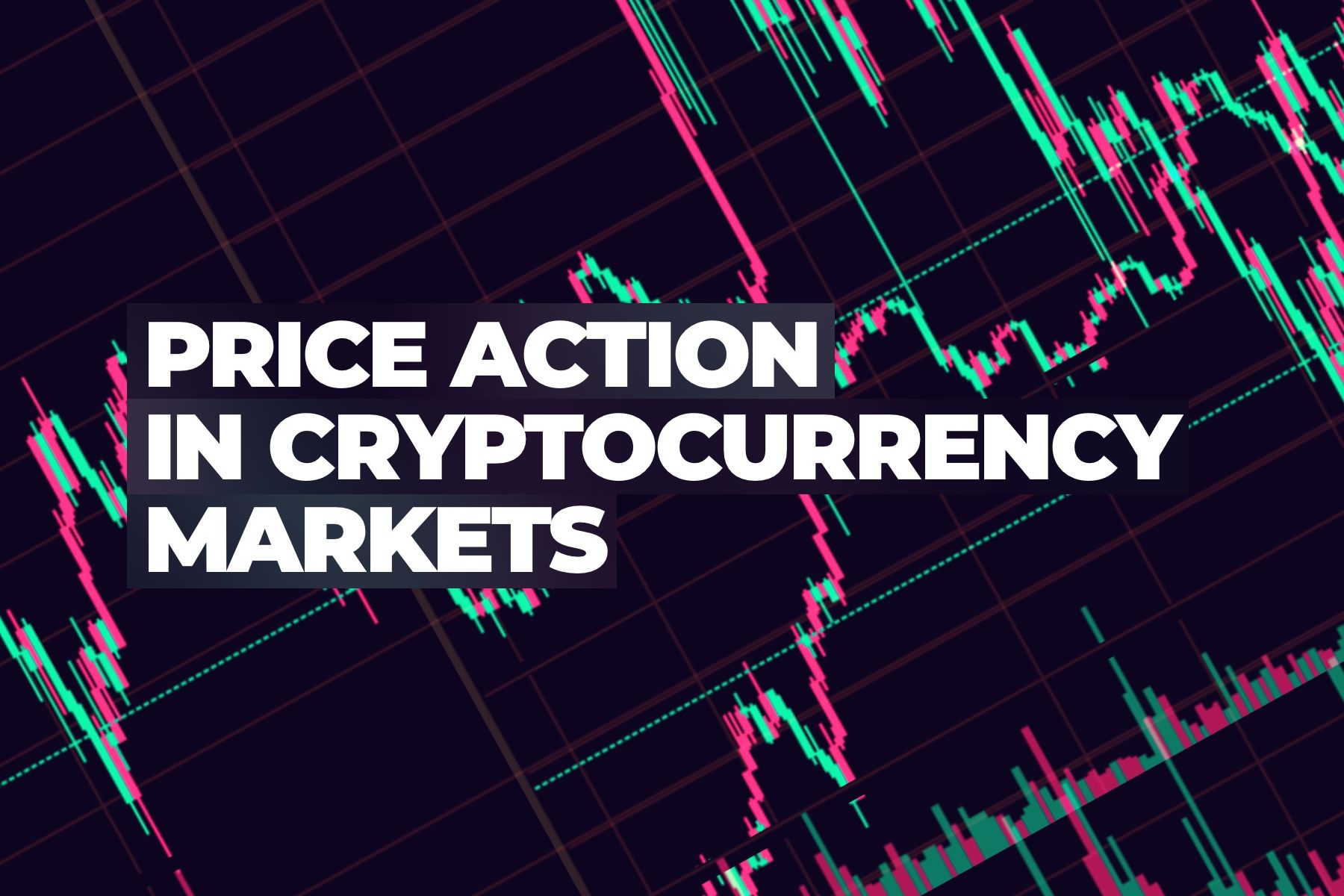 What is price action?

If you’ve ever looked at technical analysis charts, you know how quickly it can get complicated. Moving averages, Fibonacci retracements, volume, volatility, indices, ratios...

Yet most statistical indicators are trying to provide information about something which is already out there: price.

For this post, we’ve asked Cindicator’s internal team of traders about price action and how to use it in cryptocurrency markets. The Cindicator team has been active in the cryptocurrency markets since 2016. After Cindicator’s $15 million token sale, its team of traders has successfully managed the treasury and internal portfolio through both the 2017 boom and the bear market that followed.

So let’s review what price action is and how to use it to forecast the short, medium, and long-term price movements of cryptocurrencies.

What is price action?

Price action is a method of analysing market price information to identify entry and exit trade opportunities. Essentially, it’s about how price behaves in trends in the short, medium, and long term. Most technical analysis is based on price information, but price action trading is about looking at prices directly, typically as represented on candlestick charts.

“Remember that behind every indicator, every candle on the chart, there is always real capital. It’s not just lines, there is a trader or an institution who has some idea of why they have bought or sold the asset, and where they are planning to exit the trade,” says Nodari Kolmakhidze, Chief Investment Officer at Cindicator. This is clearest in the short term, he added.

In the short term (from minutes to days or even weeks) it’s important to watch historical minimum and maximum prices as well as breakouts that happen when these levels are broken. Let’s reviews this in more detail.

Extreme observations, such as minimum and maximum prices (both local and historical), attract the attention of traders. This phenomenon is known as anchoring. Studies have shown that people are psychologically prone to paying extra attention to the previous highest or lowest values.

You can identify the highest and lowest values on a chart of any scale: monthly, weekly, or daily.

For example, in 2017 the historical maximum of $400 was a resistance level that was broken and became a long-term support level.

Similarly, the previous minimum of $6,000 was the crucial support level for Bitcoin for much of 2018. This was broken in November, nearly a year later, leading to greater volumes and volatility.

When a historic minimum or maximum price is exceeded, this can start a new trend. There is usually a fundamental reason behind this. Something material has changed, because the price doesn’t reach new minimums or maximums by itself if it has remained below or above that level for months or years.

Since there aren’t many examples of ‘long-term’ trends in cryptocurrencies (simply because most assets are too young), it’s best illustrated with a related example from the equities market.

After this level was broken, the share price rapidly went up with almost no drawdowns. Fundamentally, the industry has changed: in addition to computer games, video cards have become increasingly used for cryptocurrency mining and for deep learning/AI computing. 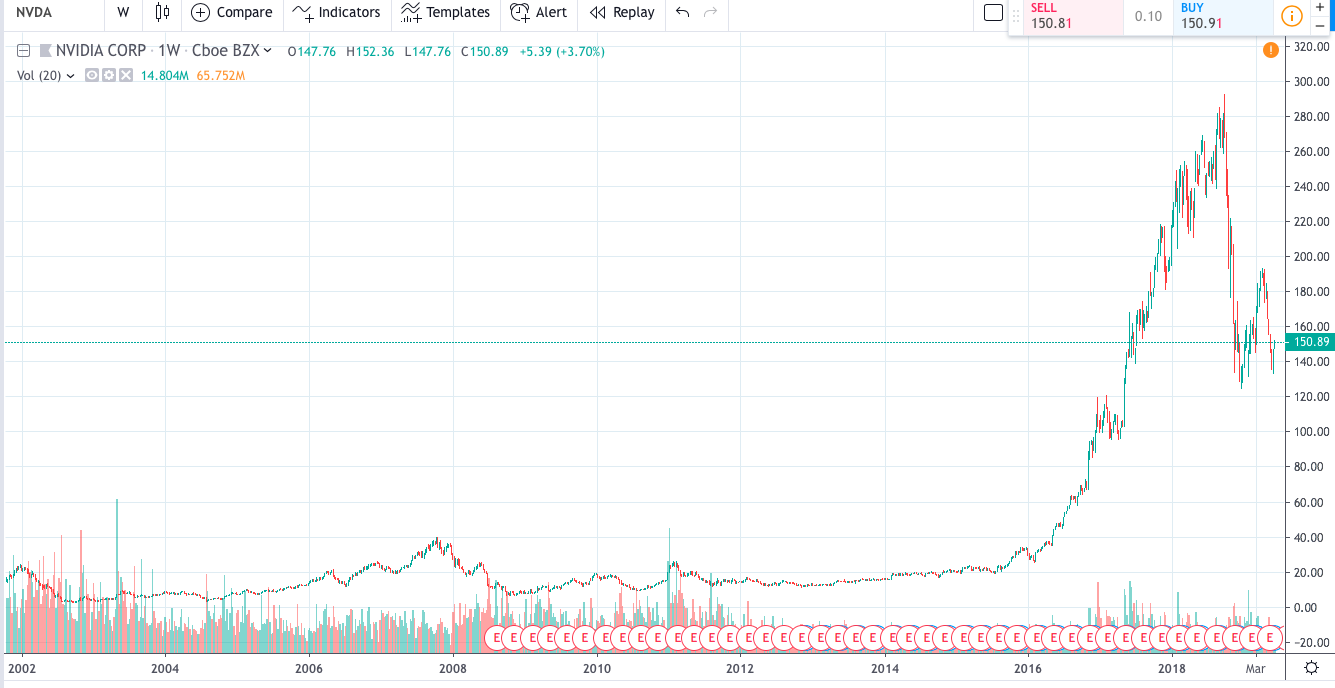 If the price breaks key support or resistance levels, this may mean that you should change your strategy. In the short term, you might need to review your planned entry and exit points. The resulting volatility could also open up new trading opportunities.

When looking at the times when breakouts occur, you can make an educated guess about where people place stop-loss orders. Traders typically set orders slightly below or above a key level. When attention is focused on a certain area, price action could be particularly strong when these stop-loss orders are activated at scale.

Some players might try to manipulate the market by exploiting this dynamic. Here is how this happens:

This strategy is known as ‘short and distort’ or ‘stop hunting’ – this is market manipulation and is usually illegal in regulated markets, but still happens in cryptocurrency markets.

Yet even in the absence of manipulations, price action is particularly strong around historic extreme values or simply ‘beautiful’ round numbers such as 100, 500, 1,000, and so on. The logic is the same: if a round number level is broken, stop-losses are activated, people panic sell, and the price moves dramatically.

This works for both short-term levels and in the long term, as far out as five years.

As we’ve seen, historic minimums and maximums are very important. Yet even Bitcoin is only a decade old and for most digital assets there isn’t even five years of market price data. In such cases, anchors based on round numbers (10, 100, 500, 1,000, etc.) are even more important.

Anchors in the absence of historic price information

When there are no historic precedents, psychological factors become crucial. People are anchoring at round numbers and expect trends to continue.

For example, when the price of Bitcoin exceeded 1K, people set their sights on 3K. Once it broke 3K, people looked to 5K as the next frontier... After 5K was taken, people expected the price to go up to 10K. Then 15K and 20K become the natural targets.

The next anchors for Bitcoin could be 30K, 40K, 50K, and so on. These are the pretty numbers where people naturally focus their attention.

Since people are looking at round numbers, the financial media will also write about them, bringing even more eyeballs. This works if the price is going to levels that haven’t been seen before.

The same logic applies to critical levels for new tokens. Investors are looking at 5x, 10x, 15x, and 30x the token sale price, which is also often a round number. A level of 21.52x is not something traders would focus their attention on.

For listed tokens quoted in BTC, the round numbers of interest would be 100 sats, 500 sats, 1K sats and so on.

When you see exponential movements in asset prices, you should remember that this will eventually end. Nothing grows for a long time at an exponential rate (except perhaps for a population of rabbits!?)

For example, the price of Bitcoin was increasing exponentially in the bull market of 2017 – this is not sustainable. Every time a new high is reached, even more buyers and money are needed to break through to the next level. Of course, at every new resistance level, more and more people want to sell and take their profit. Investors who bought at $1,000 can already sell at $10,000 at a decent profit.

By looking at a chart it is possible to (approximately) forecast the top or bottom. Certain patterns emerge around these points.

There are hundreds of chart patterns you can find in books and online courses, but it’s more important to understand what happens in the market. At a given high price (the red candle’s wick, i.e. the period’s high), the buyers stop buying, while even more sellers try to sell to take profit or short sell. The price falls sharply, the panic starts, and even more people decide to close positions.

Here is an example of a bullish instance of engulfing from 26 December 2018 when an equity sell off was reversed: 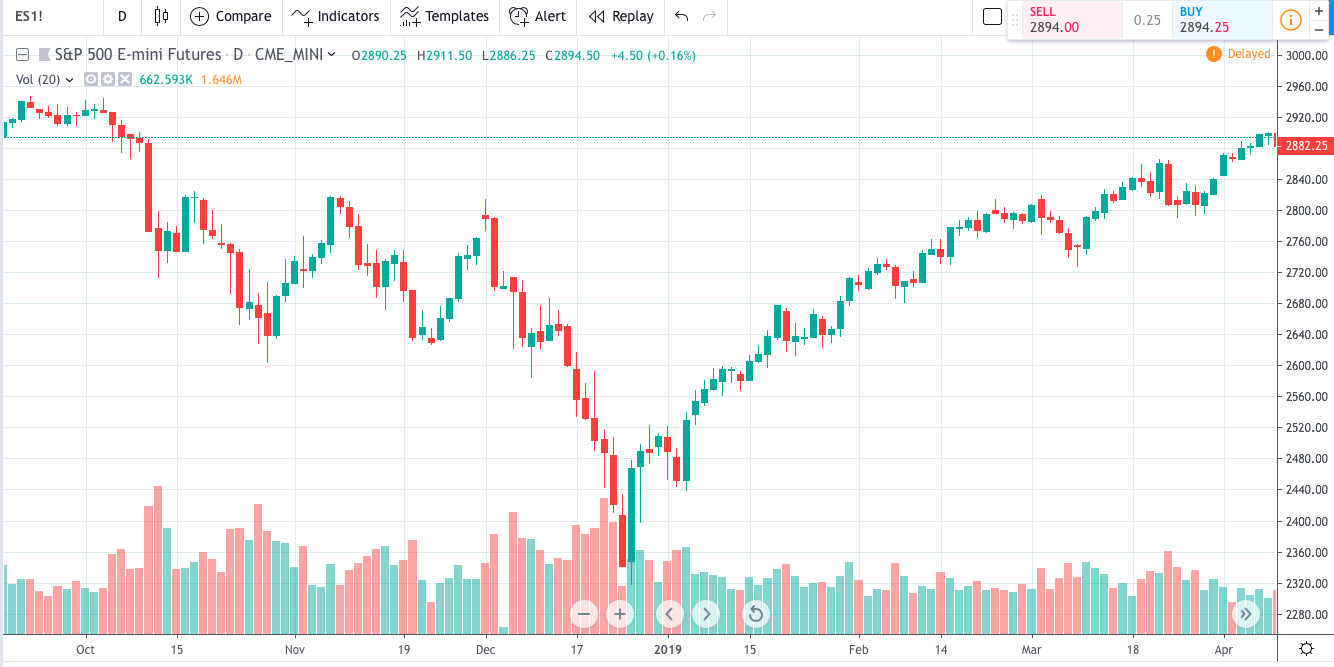 This has been less obvious in the crypto markets, but when BTC reached $3,500 in January 2019, we began internal discussions on the end of the Bitcoin bear market. The downturn was slow and prolonged, but there were no longer any new lows.

When you see these patterns, try to explore what’s happening outside the order book that might shape traders’ perceptions.

While BTC reached its January low, Initial Exchange Offerings or IEOs also brought more buyers to the market. At the bottom of the downturn, people started to seek new highly speculative instruments that could make money. Since Binance’s first IEO was very profitable for token buyers, subsequent IEOs would attract even more people. As a result, interest in digital assets in general and Bitcoin in particular was set to rise again.

Often asset prices are like a spring. If you push the spring, it will jump back because you cannot exert more pressure after a certain point. Similarly, you cannot extend the spring indefinitely either. These trends follow each other.

As we’ve seen above, price action can help to identify trends.

These are basic things that you can find in any introductory book on technical analysis, but it’s important to understand that this works because traders are making decisions based on their views of the market.

“I believe the financial markets are cyclic in nature, and it doesn’t really matter whether this is the stock market or the crypto market – as long as there are human traders participating in the markets this cycle will tend to repeat itself,” says Vyom Mahadevia, a trader in the Cindicator team.

Compared to equity and debt markets, in the crypto market the entire cycle is sped up. In just two years, we have seen a parabolic bull market followed by a bear market. This creates a lot of volatility and opportunities for traders.

As we have seen, price action can help identify turning points when a breakout happens and the long-term trend changes. In the short term, these breakouts generate opportunities when stop-loss orders are activated at scale and the market overreacts.

It is crucial to go beyond specific chart patterns and try to understand why traders behave in the way that they do. In hindsight, market behaviour seems obvious.

Predicting what the market will do, however, is extremely hard.

This can only be achieved through practice: looking at charts, making forecasts, and having skin in the game. Instead of paying for practice with your capital, you can make forecasts on Cindicator’s Collective Intelligence platform. If you have any questions, ask us on Twitter.

Automate your crypto trading with Stoic

+2,189% in its first year, beats Bitcoin and most benchmarks.

Mudrex vs 3Commas: An In-Depth Review

Shrimpy vs 3Commas: An In-Depth Review

3Commas vs Pionex: An In-Depth Review