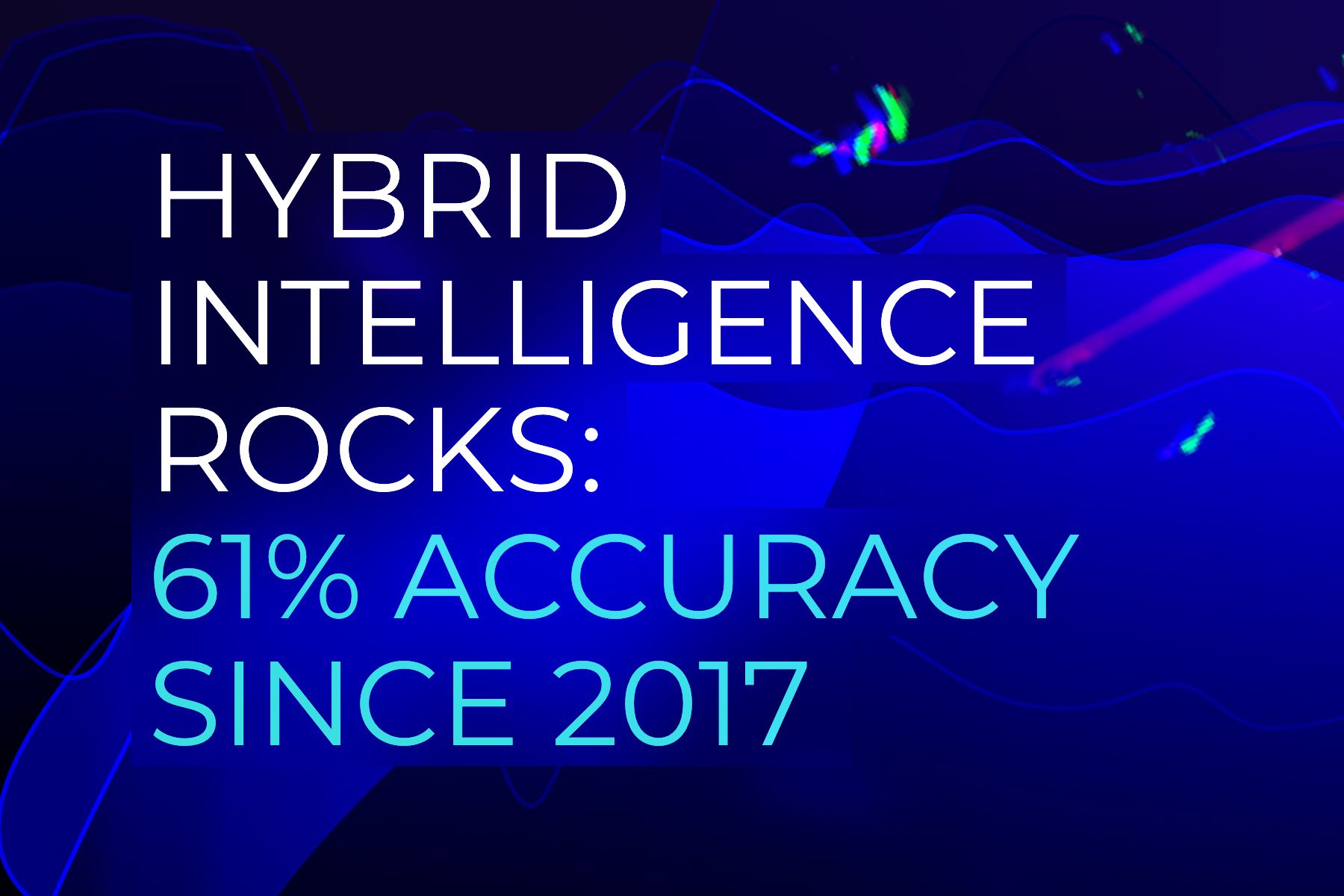 In 2015, Cindicator started developing Hybrid Intelligence. The original goal was to test the idea that groups could create better forecasts than experts. Since then, Hybrid Intelligence has reached consistent accuracy of over 60%.

Cindicator’s Hybrid Intelligence combines forecasts from tens of thousands of analysts in the Cindicator app and then applies AI to this data.

AI or more precisely Machine Learning models take into account the individual track records of each individual analyst. Some of them have been on the platform for years and have produced thousands of forecasts.

Several factors drive analysts to create forecasts by answering questions on the platform. For some, the main motivation is the desire to test and refine their analytical skills instead or before risking real money in trading. Some users just want to try to get a reward in CND, distributed at the end of each month: so far Cindicator has paid over $1 million in rewards. For others, it’s the competitive element. And some make forecasts because it’s fun.

This combination of human and machine intelligence produces indicators with stable accuracy.

Even though the first indicators were launched in 2015, the current format of questions and the ML pipeline were introduced in early 2017. Since then the number of questions has increased and then stabilized over the years.

The early dip in the accuracy could be attributed to a large number of experimental questions and indicators. Over the years, the Cindicator team narrowed down on the most effective indicators, resulting in higher and more stable accuracy.

Now let’s explore the accuracy of the two types of indicators: binary indicators and the Support/Resistance indicators.

Binary indicators are based on questions about the likelihood of the price moving in either direction.

Here is an example of a question that acts as the source of data for a binary indicator:

The resulting indicator is a likelihood expressed between 0 and 100%. For the example above, the indicator was 23.75% (a bearish case).

The Cindicator team continuously carries out experiments on the platform and carefully watches user behaviour and tracks the impact on accuracy and profitability of resulting strategies. In H2 2019 and H1 2020, several experiments explored the connection between rewards and accuracy. Based on these findings in early 2021, the rewards system was updated, linking it closely to CND. As you can see on the chart below the accuracy for binary indicators was not affected by that update. Over the period of several years, the accuracy is well above chance.

Another common indicator is the Support and Resistance. This indicator is based on answers to questions that ask about the minimum and maximum price level for the week.

Here is an example of a Support and Resistance indicator:

The resulting indicator gives two numbers for the week:

These indicators could be used for discretionary trading (for example, buying at support and selling at resistance), quant strategies, and in various Defi applications, such as for providing liquidity in Uniswap V3.

Currently, the indicators are created for Bitcoin, ETH, Cardano, Litecoin, XRP, and NEO as well as equities and commodities.

As you can see on the chart below, the accuracy of Support and Resistance indicators was not impacted by the rewards system update:

In 2020, the Cindicator team launched Signals by SuperForcasters. This subscription product uses forecasts from analysts with the highest long-term P&L for weekly support and resistance levels for Bitcoin, arguably the most unpredictable crypto asset. Some of the users have subscribed to the product since the very early days, ten or even thirteen months ago. They clearly see value in these signals.

In 2017, the Cindicator team presented an ambitious vision for Hybrid Intelligence platform with indicators that are distributed to holders of CND tokens.

This vision is now a reality.

Thousands of token holders hold CND to receive Hybrid Intelligence indicators. It’s a rare case when a crypto company from the 2017/2018 cohort has completely fulfilled what was described in the original white paper.

As the next step in developing the ecosystem, the Cindicator team is preparing an update of the CND tokenomics, tentatively known as CND+. As it’s a massive undertaking, there is no precise timeline. Still, the team plans to release this update by the end of this year.

Cindicator’s Hybrid Intelligence indicators are a complex product, which leverages both collective intelligence and AI. Trading with these indicators requires skills and practical experience. If you are interested in trying it out for yourself, you can acquire CND on the open market and register in Cindicator Edge with any crypto wallet. If you later find that the indicators don’t fit into your strategy, you can simply sell the tokens back to the market.

Another way is to follow the steps of the early subscribers to Signals by SuperForecasters. While they all follow different trading strategies, the sample strategy (aka Mike’s strategy) has returned +77% since May 2020. Not everybody has the skills to execute it so the Cindicator team is planning a new product based on SuperForecasters’ alpha — you pre-register by filling out this form.

Finally, the easiest option is to automate your crypto trading with Stoic, Cindicator’s latest product. Stoic uses Hybrid Intelligence as one of its data inputs, along with the more traditional quantitative research. In its first 12 months since launch in March 2020, Stoic’s algorithm returned +2,193%.

Finally, the full historical data of Hybrid Intelligence indicators is available for anyone to experiment with. If you have any questions, please join the Cindicator chat, where both the team and the community are ready to help.