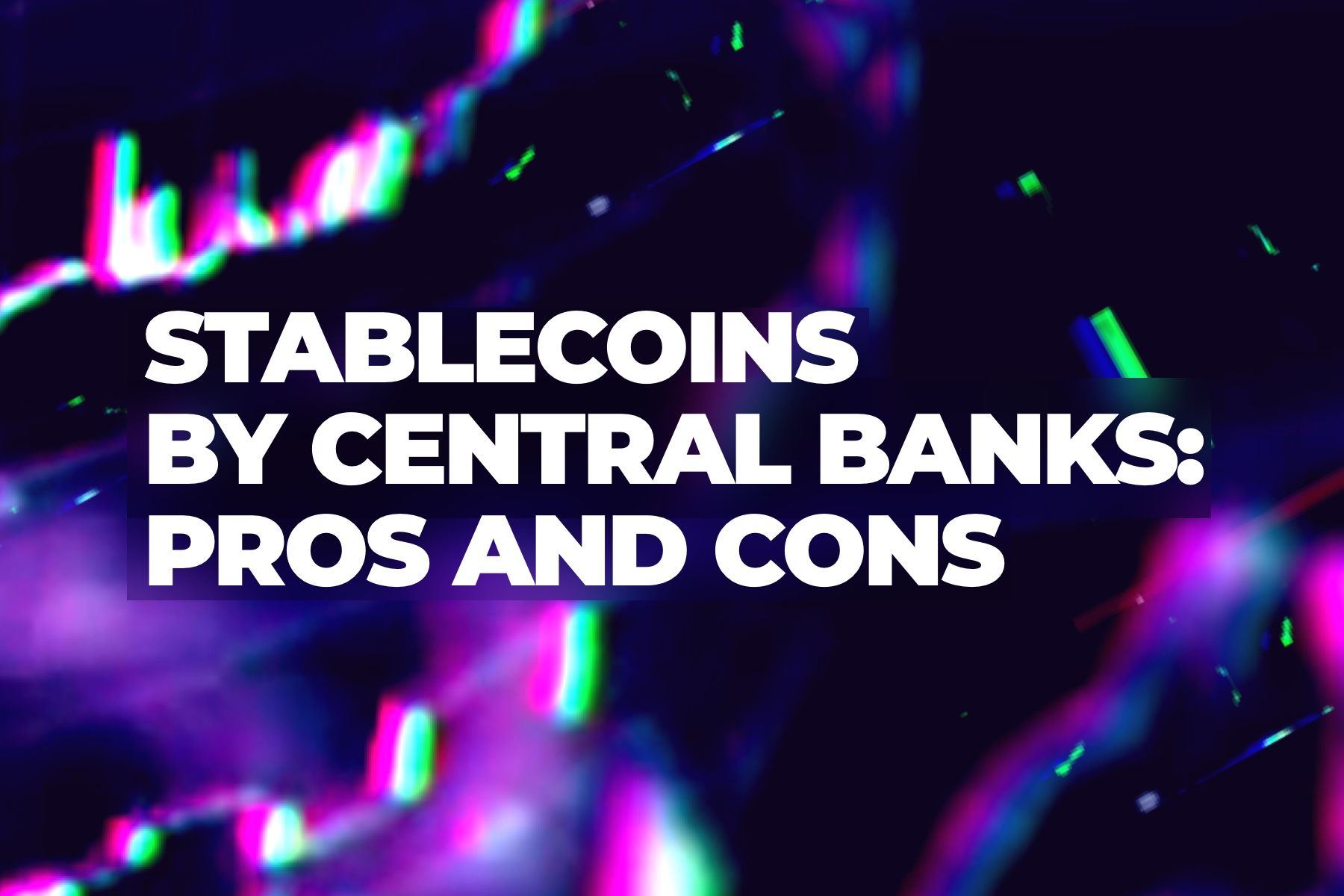 Last year, competition between stablecoins intensified as new players rushed to launch their own alternatives to Tether. Meanwhile, the IMF and World Bank started an experimental quasi-cryptocurrency.

One question in particular comes to mind: are central banks going to launch their own stable digital currencies?

Not too surprisingly, Changpeng Zhao aka CZ, CEO of Binance, asked his Twitter audience the following question about stablecoins:

Inspired by the debate that CZ started, we created two open questions for the 130,000 analysts registered on Cindicator’s Collective Intelligence platform. In this post we will summarise our preliminary findings.

At Cindicator we have one of the largest and most engaged communities of analysts who follow cryptocurrencies and digital assets daily. Every month, they generate forecasts for over 150 digital assets as well as equities and futures. And every month, the best analysts receive payouts in CND tokens, which means that all of them have first-hand experience in actually using cryptocurrencies.

The Cindicator team sources forecasts by asking several types of questions. Most questions are about binary outcomes that are useful for estimating the likelihood of certain events. For the purposes of exploratory research, however, open-ended questions are the foundation.

Benefits for a central bank from issuing a stablecoin

Benefits for a central bank from issuing a stablecoin

The respondents’ sentiment towards central bank cryptocurrencies was mostly neutral as 78% of analysts did not express any judgement in their answers. The numbers of analysts with positive and negative views were almost balanced. However, analysts who viewed such assets negatively were more vocal in their concerns over a possible dystopian future where a central bank has total control over all transactions. 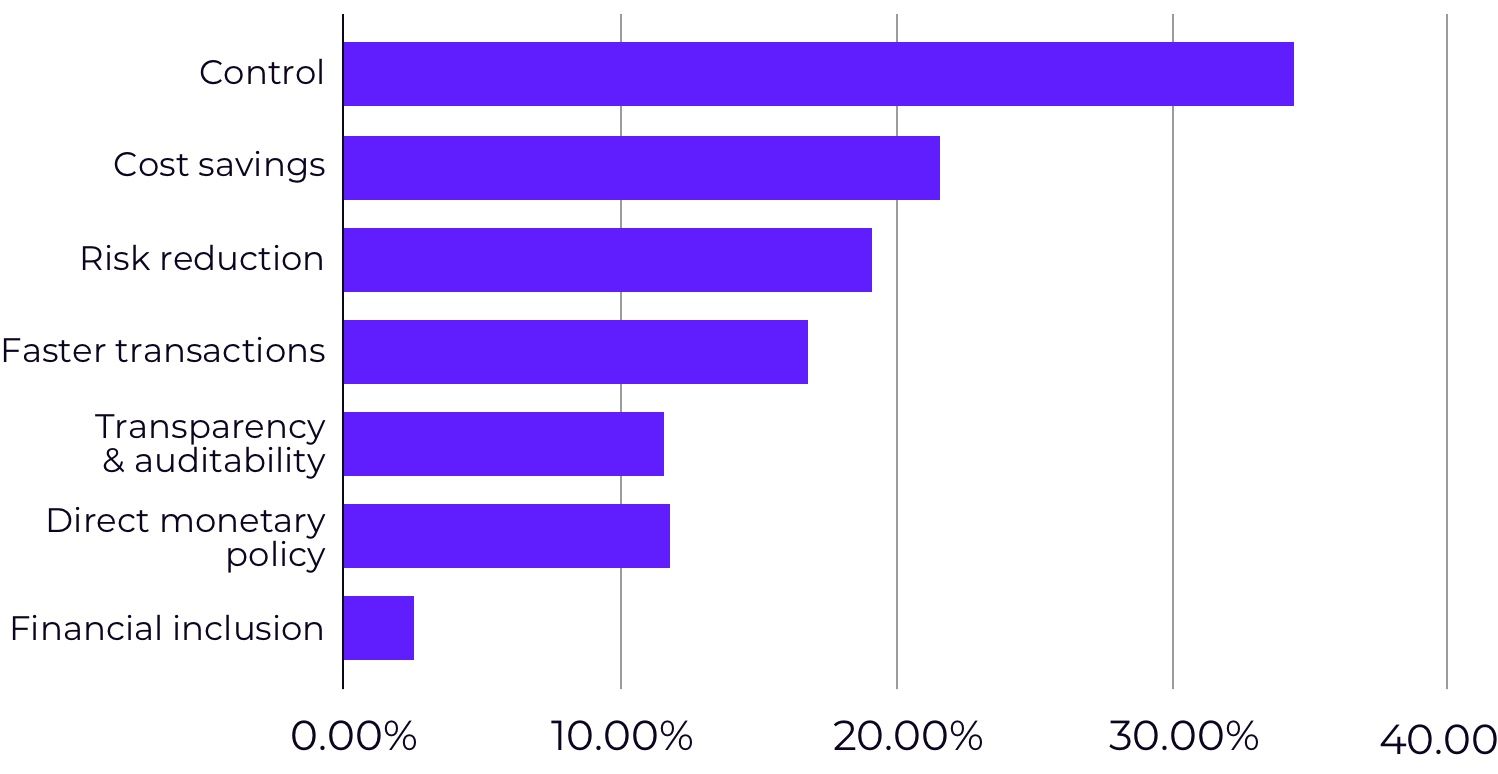 Control over users, transactions, and the economy

A prominent theme covered in 37% of all answers was the greater control that a central bank would enjoy after issuing its own stablecoin. Some analysts viewed this an opportunity to reduce corruption.

“A central bank would have total control over citizens’ expenditures. A central bank could also easily monitor state expenses. Since all accounts would be verified, it would be more difficult to carry out a corrupt scheme. In any case such a transaction could be recalled as on the EOS blockchain.”

“The first thing that comes to mind is control over transactions. The state will be able to collect all taxes, and track illegal operations. This is good for society as long as it doesn’t cross certain lines. This is probably the trend for central banks if cryptocurrencies are to repeat the growth of 2017.”

Other respondents viewed this control negatively:

“A centralised stablecoin will be monitored, tracked, and taxed at every possible event. Any failure to comply with their terms of use and service will result in funds being seized, no different than a traditional bank. I agree that giving sketchy operators…control of stablecoin creation, handing total control to the banks makes crypto a powerful tool for our own enslavement.”

“A central bank-issued stablecoin would allow for central banks/governments to invade the privacy of their citizens by seeing every transaction that occurs on the blockchain. A central bank could set conditions for certain transactions in order to be executed (i.e. capital controls, age limits, etc.) Such a coin would allow for expansive control over how a nation’s citizens use their money and would almost entirely eliminate privacy. Banks and governments could easily implement negative interest rate policies or “bail in” private citizens’ hard earned money during rough times or times of “crisis”. This type of coin would not be issued on a permissionless blockchain.”

Nearly 18% of respondents viewed a central bank stablecoin as a way to reduce the systemic risk in the economy. This theme links closely to greater control over the economy, transparency, and the ability to directly set monetary policy.

“[T]he objective of greater surveillance and/or reduction of systemic financial risk would be pursued since cryptocurrencies would be identifiable: universal access, … but not anonymous.”

Additionally, 11.41% of all analysts believed that issuing a stable cryptocurrency would enable a central bank to set and execute monetary policy more directly. For example, they could expand or contract monetary supply programmatically without relying on the banking system as an intermediary. For such a complex topic, however, answers were lacking in detail.

“Monetary policy could do whatever the central bank wanted in a ‘hard-coded’ way. Such as introducing negative interest rates.”

“It is an opportunity to modify the fractional reserve system and the role of commercial banks in the money supply.”

Other types of benefits that were named would depend on the actual implementation of a stablecoin.

Over 20% of analysts thought cost reduction through lower transaction fees and other expenses could be a key benefit of launching a centralised stablecoin.

Faster transactions was another frequently mentioned benefit, cited by over 17% of analysts.

Over 12% of respondents said that transparency and/or auditability would be another advantage. This assumes that the ledger would be open and readable by other parties.

Finally, 2% of analysts thought that a central bank stablecoin would encourage greater financial inclusion. The apparent assumption is that such a coin would be widely available to all people across the world, even those without a bank account.

Benefits for users and the economy

We also asked analysts about what benefits a central bank stablecoin could bring to end users and the overall economy.

Despite the prominence of a vocal minority of analysts who are concerned about greater control, 88% of respondents named specific benefits for users and the wider economy.

Benefits for users from a central bank stablecoin

Greater stability, security and overall risk reduction was the most prevalent theme with 34% of analysts flagging this as a benefit for users and the economy. Other commonly cited benefits were faster transactions, lower fees, and ease of use (compared to existing cryptocurrencies and traditional banks alike), although this would depend on the actual implementation. 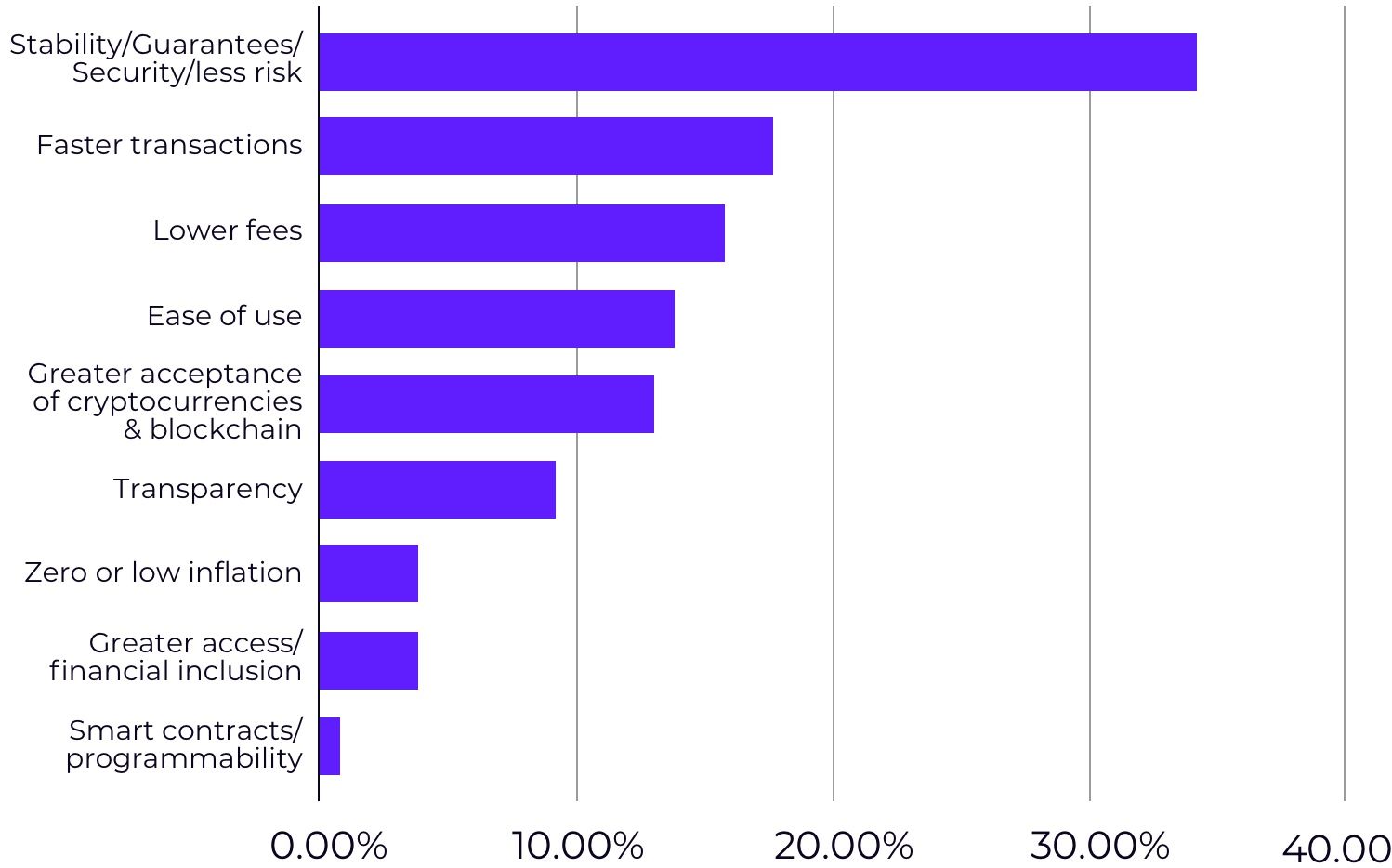 Central bank stablecoin benefits for users and the economy

Stability and security through trust

Greater stability, guarantees, and perceived security is rooted in trust, according to many analysts. In some instances central banks were occasionally compared to exchanges.

“The only advantage is that central banks can give more guarantees than an exchange...but at this point there would not be much difference between fiat or a state's stable coin.”

“[A stablecoin issued by a central bank] is a dilution of the original intent of the blockchain, however the outcome may prove beneficial to others in this space as the 'perceived' level of trust is elevated.”

Greater acceptance of crypto vs attempts to control

About 13% of analysts thought that a central bank-issued stablecoin would spur the mass adoption of cryptocurrencies and blockchain in general. Most responses citing this as a benefit were brief and did not provide a detailed explanation. It appears, however, that most believe that such a move by a central bank would add legitimacy to cryptocurrencies and would help to bridge the gap between the traditional economy and digital assets.

On the other hand, 11% of analysts did not see any benefits for users or the economy. Some have voiced concerns that a project like that would be an attempt by central banks to gain control over cryptocurrencies.

“Zero benefit. They already effectively have digital currencies since most transactions are done via card and banking is done electronically. They would maintain ownership control over the asset and without mining the network will be entirely centralised. WE ALREADY HAVE THIS! The idea behind a decentralised digital currency is to break away from the constraints put on society by modern banking. Supporting central bank issued stablecoins ensures we will remain a slave to their system. They have come to realise they can't stop crypto adoption. This is their attempt to control it.”

Nearly 10% of analysts hope that a stablecoin would help to increase transparency regarding central bank policies. This could even strengthen trust in institutions, some analysts noted.

“A big advantage for both [end users and the economy] would be the new level of transparency that would come with such a development. If handled with an open ledger … all the actions of the central bank regarding the creation and distribution of this stablecoin could be analysed more easily and better understood by individuals. This would strengthen trust in the integrity of the work of the central bank.”

Almost 4% of analysts believe that a stablecoin issued by a central bank would help to rein in excessive inflation. A few of these respondents assume that central banks would target zero inflation, which they apparently interpret as a good outcome for end users, contrary to conventional economic theory.

“For users, the main benefit is transparency. They can view the ledger at any point to see the current state, without having to place exclusive trust in the institution that has issued the asset as to its accuracy. For the economy, the main benefit also relates to transparency, but with regard to issuance. Currently, central banks are able to manage inflation without proper accountability. With a stable coin, monetary policy and rules for alterations will likely be stated up front, meaning that stakeholders can verify that these rules are being adhered to. At a macro level, this may help to restore a greater degree of trust in institutions, which has been progressively eroded since the global financial crisis.”

This is just a preliminary examination of hundreds of detailed responses that we have received. We hope it offers a useful glimpse into how the cryptocurrency community views potential stablecoins issued by central banks and similar assets in general.

Are you interested in collaborating to further explore this data?

Do you have other questions to put to the Collective Intelligence of 130,000+ analysts?

If so, please also fill out a short form to tell us more about yourself and what you have in mind. We’re always open to new ideas and sharing knowledge with the world.