Stablecoins: what they are, market capitalisation, ranking, exchanges, issuers 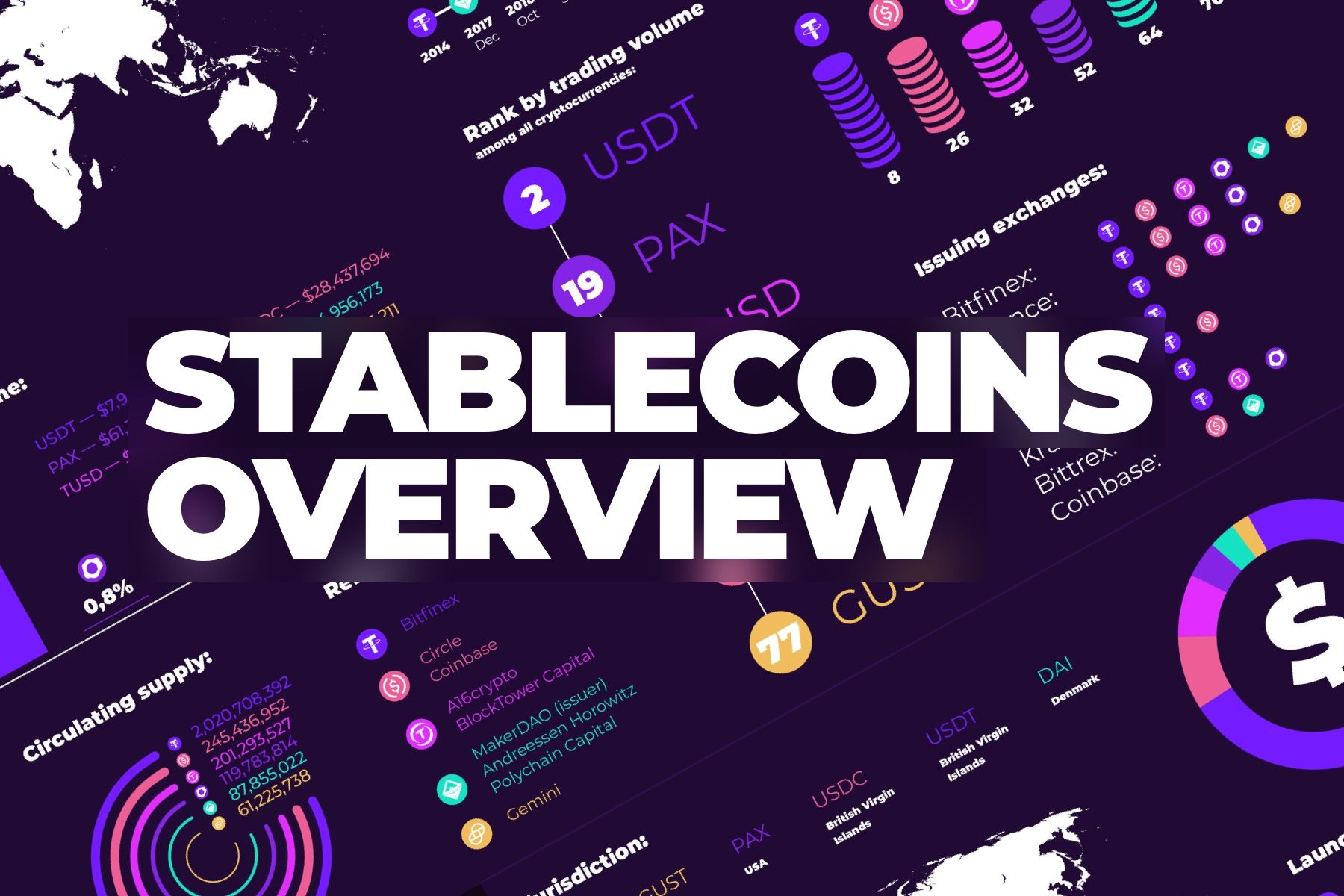 Stablecoins have emerged as a major part of the digital asset ecosystem. Cindicator Analytics has reviewed the most prominent stablecoins and summarised its findings in a single infographic.

What is a stablecoin?

The definition of a stablecoin is straightforward: it is a cryptocurrency that aims to have the lowest price volatility possible. Usually, the stablecoin’s price is pegged to USD or another stable asset.

Stablecoin cryptocurrency plays an important role: it provides a way for investors and traders to move liquidity between exchanges, vary exposure and hedge risks without converting to fiat currencies such as USD or EUR.

All these assets are either USD-backed cryptocurrencies or pegged to the US dollar.

Except for Tether, the oldest USD-backed coin, and Dai, the other major stablecoins launched in 2018.

Only Tether was issued on the Omni Layer protocol, which is based on the Bitcoin blockchain. Other major stable coins are issued on Ethereum as ERC-20 tokens. Tether’s USDT is also available in a ERC-20-compatible version.

Only Tether is ranked among the top 10 digital assets by trading volume. Other stablecoins are significantly behind.

Newer stable cryptocurrencies are listed on at least two major crypto exchanges. Bitfinex, OKEx, and Binance have the highest numbers of stable assets available for trading.

Despite inroads made by newer assets such as PAX stablecoin and TUSD, Tether’s share of trading volumes still makes it the leading stable asset. Other stable cryptocurrencies do not even come close.

Each stablecoin is associated with at least one major player in the digital asset space. Three coins are affiliated with exchanges: Tether with Bitfinex, USDC with Coinbase, and GUSD with Gemini. Two other assets, Dai and TUSD, are affiliated with VC giant Andreessen Horowitz and its cryptocurrency arm a16z crypto.

Most stablecoins are issued by US-based companies or via entities registered in the British Virgin Islands, where USDC, the Coinbase stablecoin, and Tether are based. MarkerDAO’s Dai stablecoin is an exception as its origins are in Denmark, although it aims to exist beyond any single jurisdiction as a decentralised cryptocurrency.

This is just the beginning of the “stablecoins war”. While Tether is still in the lead by trading volume and overall capitalisation, other coins are gaining pace as exhibited by the high number of listings on Tier-1 exchanges. Each project aspires to become the de facto reserve stablecoin for the entire market, though it’s not yet clear which one will emerge as the winner.