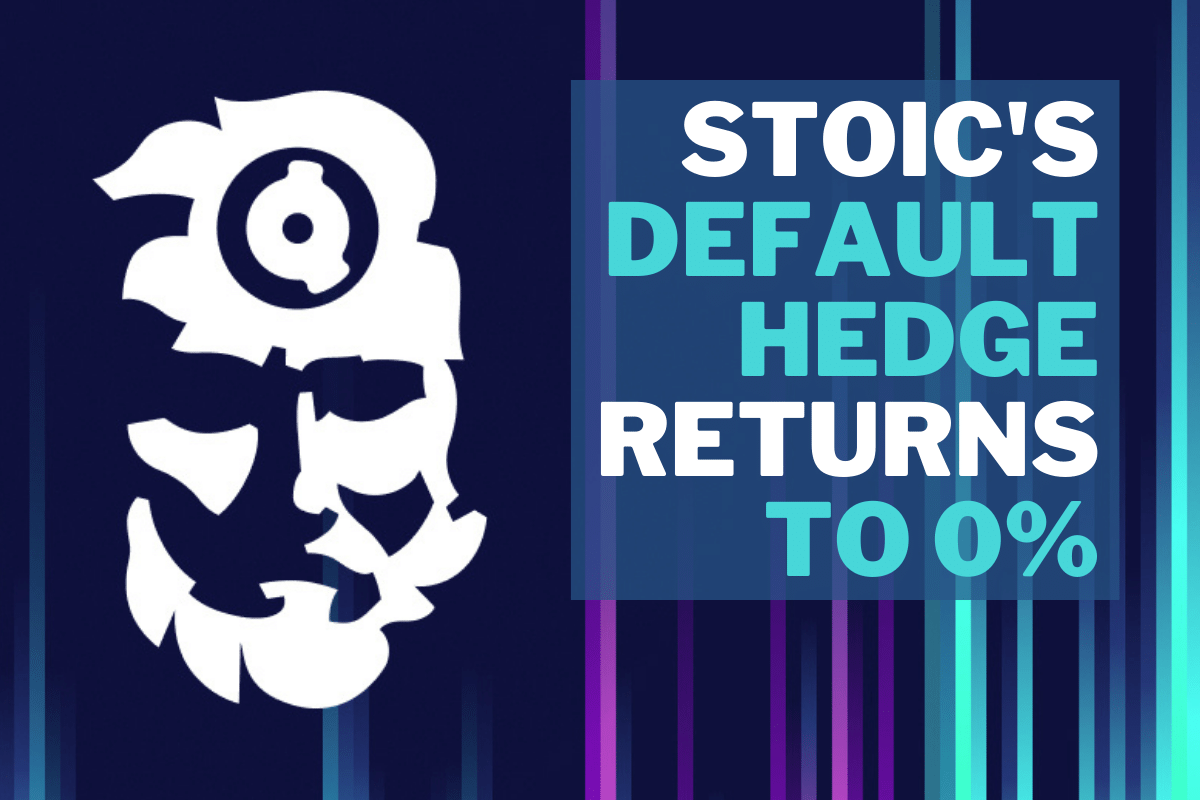 Why is this bullish from a long term perspective?

Stoic’s portfolio strategy has a hedging mechanism inside. A user may change the Hedge on their own based on their market view, or they may rely on Stoic’s default Hedge. Essentially, the Hedge is the percentage of user’s portfolio that is being kept in a stablecoin, USDT.

Stoic doesn't change its default hedge often as it’s a long term mechanism that is designed to protect capital during euphorias and to allocate more during market panic. While viewing the history of changes, you may notice that Stoic increases its Hedge during “pumps” and bull runs, then decreases it during sharp corrections or prolonged declines.

For example, Stoic had a 50% Hedge (meaning 50% of the portfolio was sitting in USDT) from the very end of 2020 till May 20, 2021, where the sharp correction happened and Stoic cut its hedge to 30%. Meaning, while everybody else was buying DOGE at a $80B valuation during a moment of extreme euphoria, Stoic preserved 50% of users' capital from this madness.

But, when panic levels rose up (and DOGE’s capitalization “halved”), Stoic released 20% of the portfolio to buy cheaper assets. In the three months following and after the markets recovered, Stoic again increased the Hedge to 40% as euphoria came back.

During the crypto market’s ATH, Stoic’s Default Hedge was sitting at 30%, meaning that Stoic anticipated an imminent correction and wanted to keep 30% of its portfolio in USDT to save it for future purchases. The market started dropping and so did the Hedge, which means that Stoic invested this USDT stash towards the market at better price points.

Eventually, on November 14th, 2022, Stoic set its Hedge back to 0%, finishing the almost two-year cycle of increased Hedge. This means that Stoic has allocated the last 10% of its stablecoin war chest to invest in crypto during the FTX fallout, while everybody else is panicking and counting their losses.

The crypto market finished its full cycle and ended up at similar prices when Stoic’s Hedge was first introduced and increased two years ago.

Why do we believe this is a bullish sign?

Considering that recently Stoic has decreased its default hedge back to 0%, it may be a subtle bullish sign from a long term perspective. The reason is that Stoic considers the current panic and prices as an attractive entry point for its long-only strategy. And it indeed is - the crypto industry has developed quite a bit since 2020, and you can now enter at 2020’s prices - isn’t that a great deal?

Does this mean the crypto market is going up?

No, it doesn’t as Stoic Hedge is a long term algorithm and the market may go way lower than where it sits today. There may be some hidden consequences from the FTX fallout, the food and energy crisis, or the US Federal Reserve rate hikes. Yet, in the mid to long term perspective, we believe that the market is more likely to be bullish and we will see higher prices and capitalization than today.

As no one is able to predict the top or bottom, it makes sense to use the DCA strategy. Personally, I've been DCA-ing into Stoic in the last several months and will continue to do so until we see the bull market again. Doing so I consider any correction as a good buying opportunity and I keep my mind cold.

You could do the same or invest in a Lump Sum - but make sure to invest what you can afford to lose. Not because you’re going to lose the investment - rather because in this case you’re more likely to hold through the correction and not exit all your positions during a possible panic. It also keeps your mental health in a better shape - and this is one of the most important things besides investing.

Remember, there are advantages to using Stoic for getting smart exposure on crypto market:

60/40 Portfolio is Doomed: Stoic's Fixed Income Strategy is the Cure
Never Guess the Market Bottom - Do This Instead
TradFi vs. DeFi - 5 Key Distinctions and Similarities