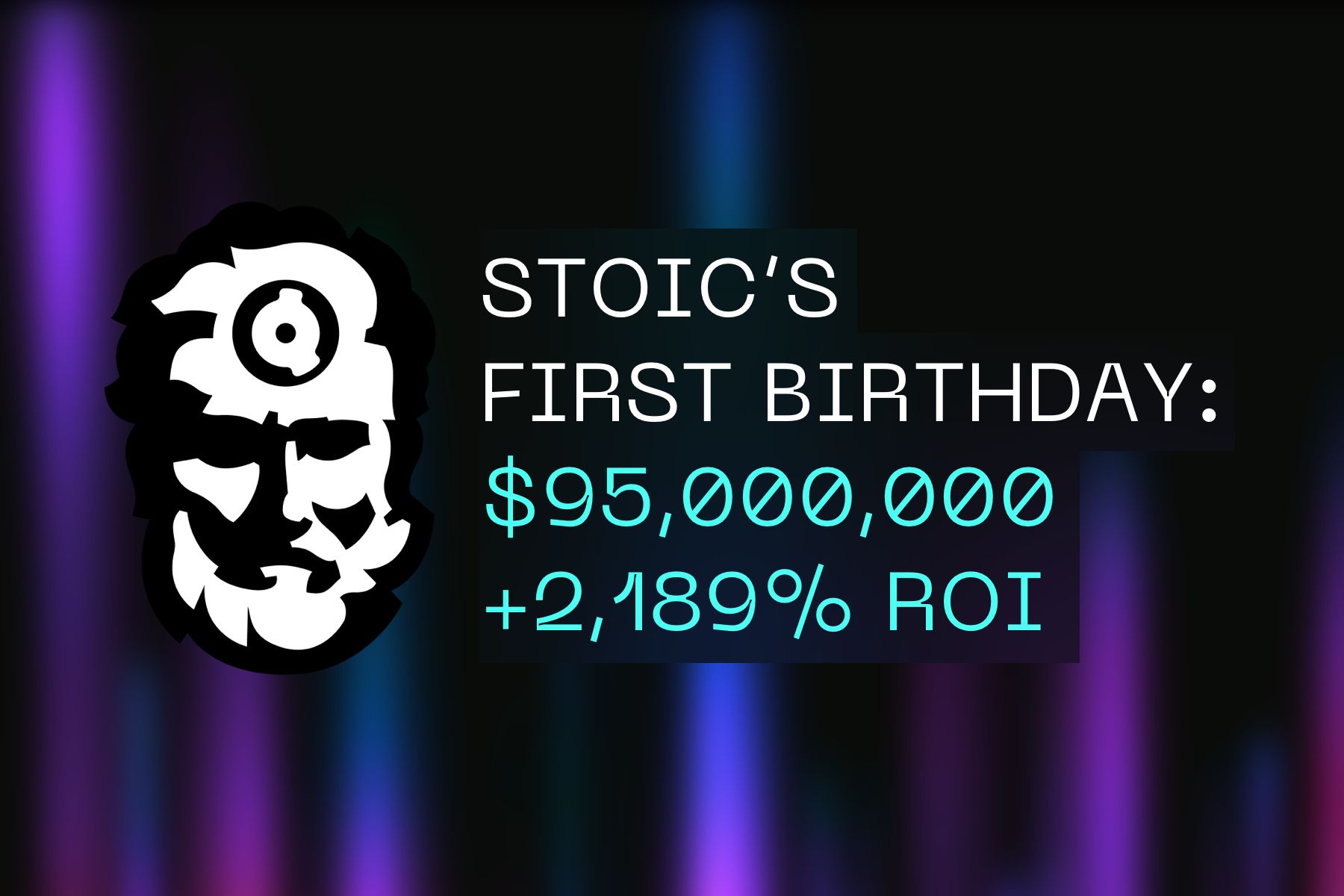 A year ago, Stoic’s mobile apps went live in the app stores. Yet it wasn’t an empty town: in March 2020, the first intrepid users connected the Stoic long-only portfolio strategy to their Binance accounts. Based on their feedback, it became clear that Stoic is something people need. And six months later, the first version of the app saw light.

In this post, we’ll share some of the highlights from Stoic’s first year in the public eye.

Stoic is not just yet another crypto trading bot.

It would be more accurate to think of Stoic as a tool for smart crypto investing. Stoic combines Hybrid Intelligence data and quant research to build a diverse portfolio with superior risk-adjusted returns. Then every day, Stoic rebalances the portfolio, aiming to buy more of assets that are poised to trade upwards and selling some assets to consistently take profits and cut any losses.

In theory, it’s possible to do that by trading on your own. Yet Stoic not only saves time. More importantly, it alleviates negative emotions and stress of making investment decisions.

This is in Stoic’s DNA from the very beginning.

How it all started

In 2019, after years of research and experiments, Cindicator launched its hedge fund, Cindicator Capital. It is the first quantitative crypto hedge fund powered by Hybrid Intelligence. Like other hedge funds, its target audience is HNWIs and institutional investors across the world.

Bitcoin and the rest of the crypto market suffered some of the worst corrections in history.

The world changed in a matter of weeks. The transition of work and life from physical to digital was accelerated by years if not a decade.

As Yuri Lobyntsev, co-founder and CTO of Cindicator, said: “It became clear, that hedge funds are an antiquated structure. There was no fundamental reason why that technology should be available only to the richest 0.01%. We could change that game.”

Even before that the team was discussing the idea of offering trading strategies via a simple mobile app that connected directly to Binance accounts. Lots of people were interested in Cindicator Capital but most were priced out.

That’s because the traditional hedge fund set-up has high admin and legal costs, making any investments under $100k uneconomical for the fund.

Vlad Kazakov, Cindicator’s Head of Products, started to test the idea of a mobile app by setting up calls with CND token holders.

“The idea for Stoic came from personal experience. Emotional trading during the 2017 crypto boom and the bust that followed left my personal portfolio deep in the red. I wanted a way to manage crypto without the fear of missing out on hot opportunities. Without the stress of constantly thinking about what to do with existing positions. Turns out, I wasn’t alone,” — Vlad Kazakov said.

The calls went well: people really liked the idea of connecting a hedge fund-grade strategy to their accounts.

That project was in stealth mode yet excited users could hardly keep quiet. The first happy users in the Cindicator chat were dropping hints of what is coming up.

Then in September, the Stoic app finally went live in App Store and Google Play.

That was the beginning of a new era. Now anybody with at least $1k on a Binance account could use Stoic's trading strategy that was previously only available to the wealthiest. The story was picked up by hedge fund media (e.g. Hedgeweek and Alpha Week) and people started to take notice.

By the end of 2020, users connected Stoic to Binance accounts holding over $2.5 million.

From there, things started to pick up quickly.

As the crypto market began growing again, Stoic’s first users made impressive gains. Their friends started to join. Social media was abuzz with reviews of Stoic.

And that’s not surprising — just look at Stoic’s cumulative performance. It outperformed both Bitcoin and Crypto20, a portfolio of crypto assets.

Now, exactly a year since the Stoic app hit the stores, the long-only portfolio strategy is connected to user accounts holding over $95 million in crypto. Over 10,000+ users now trust Stoic.

This is just the beginning.

Cindicator’s team of quant researchers is always busy developing and testing new strategies. An upcoming long-short strategy is in the final stages of testing.

The development team is now working on adding new features to three apps: iOS, Android, and the web. This includes the overall polishing of the backend (the app is still a bit slow, but that will change soon), new payment methods, the link between the CND token and Stoic, and much more.

Meanwhile, Stoic’s referral program is starting to bear fruits and a new contest with cool prizes is coming up (stay tuned!).

On behalf of the whole team, we’d like to thank you for trusting Stoic. We hope you’re enjoying this journey.

And if you haven’t yet used Stoic, now is a great time to hop in. It is still the very early days, for both Stoic and the whole crypto market. Today, please join us in celebrating Stoic’s first year in the public domain — share your review on Twitter and tag @cindicator (feel free to add your referral link!).