The 10 most trusted people in crypto 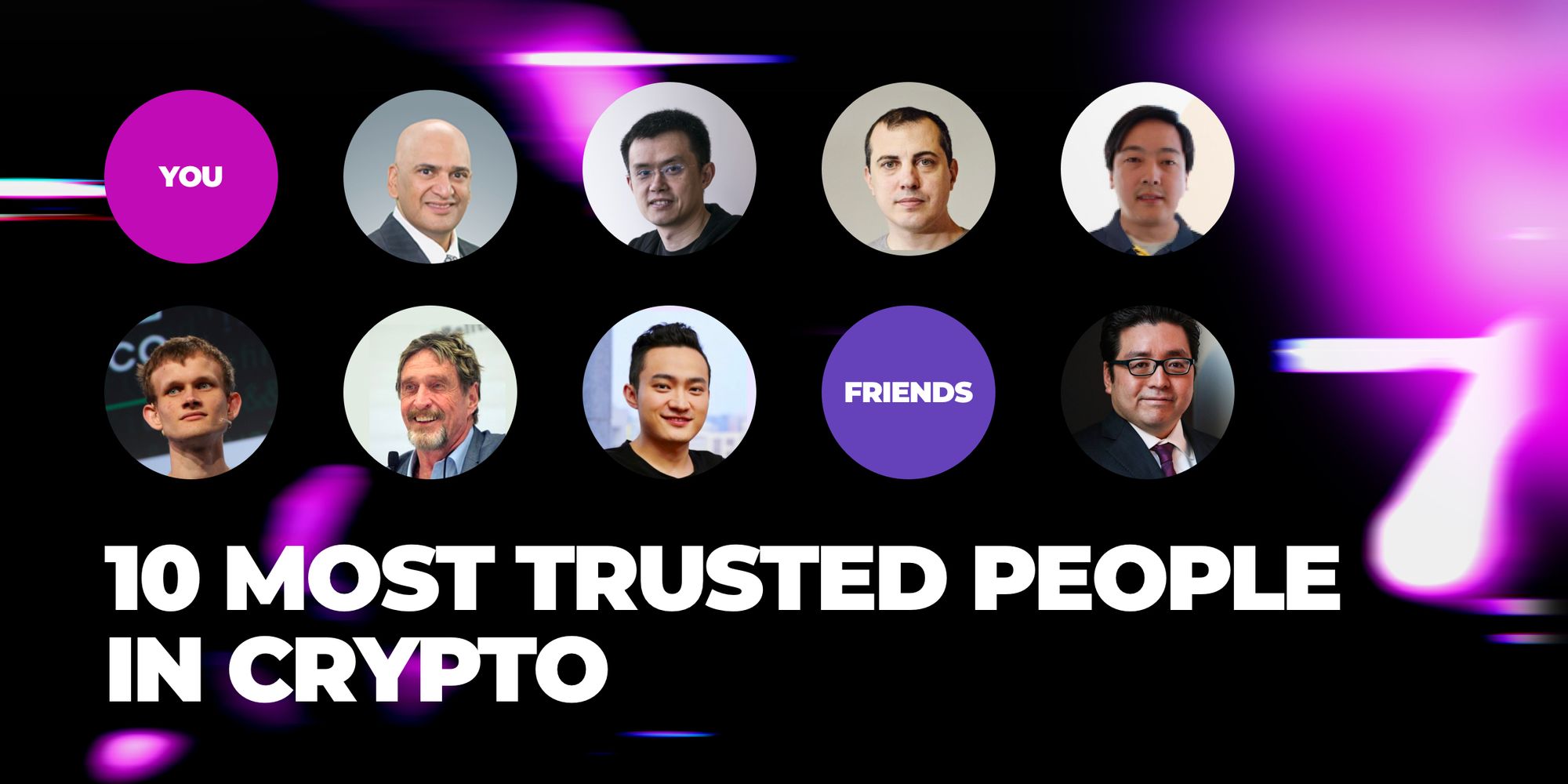 The digital asset market is still a very young industry and one which doesn’t have any indisputable authorities except, perhaps, for the legendary Satoshi Nakamoto.

So to find out who market participants trust most, we posed the following question to the 130,000 analysts registered on the Cindicator platform:

Who do you trust most for advice on the crypto market? Please name just one person and explain why.

The results showed that there are no dominant figures. Instead, there was a long tail of names with several prominent personalities emerging as the top 10 most trusted people. Below is the list, which is certainly not without controversy.

Thomas Lee is a Managing Partner and the Head of Research at Fundstrat Global Advisors. He is an accomplished Wall Street strategist with over 25 years of experience in equity research. Prior to co-founding Fundstrat, he served most recently as J.P. Morgan’s Chief Equity Strategist from 2007 to 2014, and previously as Managing Director at Salomon Smith Barney. He can be found tweeting at @fundstrat.

A significant share of respondents said that they only trust friends. Some named specific friends while others have simply said that in the crypto markets they only trust people who they know well on a personal level.

Justin Sun is the founder of TRON Protocol, a web 4.0 blockchain DApp platform. He was the first millennial graduate from Hupan University and is a protégé of Chinese tycoon Jack Ma, Chairman of Alibaba Group. Recently, Justin Sun made headlines around the world after paying $4.57 million at charity auction to have lunch with Warren Buffet.

One analyst pointed out:

“Yes there has been a lot of hype and fuss, however based on Justin's past credentials and age I believe that he has the willpower and desire to make his project a huge success within the next two years.”

John McAfee is a cybersecurity expert, entrepreneur, and one of the most eccentric cryptocurrency fans. He founded the antivirus software company McAfee Associates in 1987 and ran it until 1994. In 2011 the company was acquired by Intel but the software retained the McAfee brand name. Last year, McAfee announced his plan to run for President of the United States in 2020, intending to use his platform to promote cryptocurrencies.

“Because he is hunted by the US government he must be saying something true.”

“[He has] a lot of followers and I can see the impact of his opinion on the crypto market.”

Vitalik Buterin probably needs no introduction for anyone in crypto. In addition to co-founding Ethereum, he also co-founded and edited Bitcoin Magazin in 2012 at the young age of just 18.

Here’s what some analysts said:

“He seems to have a level head about the applications and limitations of the technology and is not blinded by the investor/’moon boy’ craziness that overtook the cryptocurrency ecosystem in the last couple of years. He knew when things were overvalued and required adjustment and said so, despite being shouted down for it.”

Charlie Lee is best known for creating Litecoin in 2011 and releasing it to the public after mining just 150 coins. Since then he has worked at Coinbase as Director of Engineering. In 2017, Lee announced that he had sold most of his LTC to avoid a perceived conflict of interest. He still works for Litecoin as Managing Director of the Litecoin Foundation.

“In the past years, Charlie has been freely speaking about his thoughts on various digital currency issues, and is well known for supporting various projects and actions in this area. He usually talks about Bitcoin, scalability, forks and atomic exchanges. His words are rational. He provides material with reason and logic.”

Andreas Antonopoulos is best known as an advocate of Bitcoin. He hosts the Let's Talk Bitcoin podcast and teaches the MSc in Digital Currency at the University of Nicosia. He is also the author of a number of influential books including Mastering Bitcoin, The Internet of Money, and Mastering Ethereum.

“Without a doubt, Andreas is one of the most qualified speakers on topics related to blockchain, cryptos and the entire DTL space.”

“He knows what he is talking about and doesn’t come up with crazy fantasy stories. He keeps it professional and does not get affected by shills or other types of sales representatives.”

Changpeng Zhao aka CZ is the CEO of Binance, the largest crypto exchange in the world. Analysts have praised his open and frequent communication via Twitter.

“The news from his Twitter seems important and has an immediate impact on the market.”

“CZ understands the nexus between memes like #SAFU and their actual application beyond lip service.”

Unlike the other people on this list, Teeka Tiwari does not have a massive Twitter following. Teeka Tiwari is a Wall Street veteran and editor of the influential Palm Beach Report.

“He looks at the crypto market from multiple angles. He has a great way of explaining things to the layperson. His risk management has worked.”

“His portfolio history speaks for itself and although most of his coins were severely hit during the ‘crypto winter’, he still was in the green on projects where he invested early on and made enormous gains.”

“I only trust myself” was by far the most popular answer. Some have noted that influencers and commentators have their own agendas. Meanwhile, people who really know the market (market makers, for example) or traders who have found their own edge would not share it.

“Nobody apart from myself. Even if I get it wrong. Gains or losses are on me. DYOR!”

“Most people are charlatans. CT is 99% people who don't actually know how to trade. They aren't doing anything I can't do better for myself. Nobody has been trading crypto long enough to have the track record to warrant mentorship.”

“Myself because the market is highly volatile and random and ‘specialists’ are never in agreement. So the best bet is to handle things carefully without being troubled by noise.”

The most trusted people in crypto, according to Cindicator’s collective intelligence

The most trusted people according to PRO analysts

The top responses were different among the PRO analysts, i.e. the ones who make at least 150 forecasts a month with an accuracy of over 60%.

Among PRO analysts, more than one in five said that they trust nobody in the crypto market and only rely on themselves.

At the same time, in the list based on PRO analyst responses, Binance CEO CZ slid to 9th place and Justin Sun, founder of TRON, dropped out of the top 10 list.

The only new face in the list was Charles Hoskinson, CEO at Input Output HK.

Charles Hoskinson is a technology entrepreneur and mathematician. He has co-founded three cryptocurrency projects – Invictus Innovations, Ethereum and IOHK. He was the founding chairman of the Bitcoin Foundation Education Committee and established the Cryptocurrency Research Group in 2013.

One analyst pointed out:

“His focus on science and peer review for the development of cryptocurrencies is the least risk-prone path to success.”

Here is the list according to Cindicator’s PRO analysts:

Automate your crypto trading with Stoic

+2,189% in its first year, beats Bitcoin and most benchmarks.