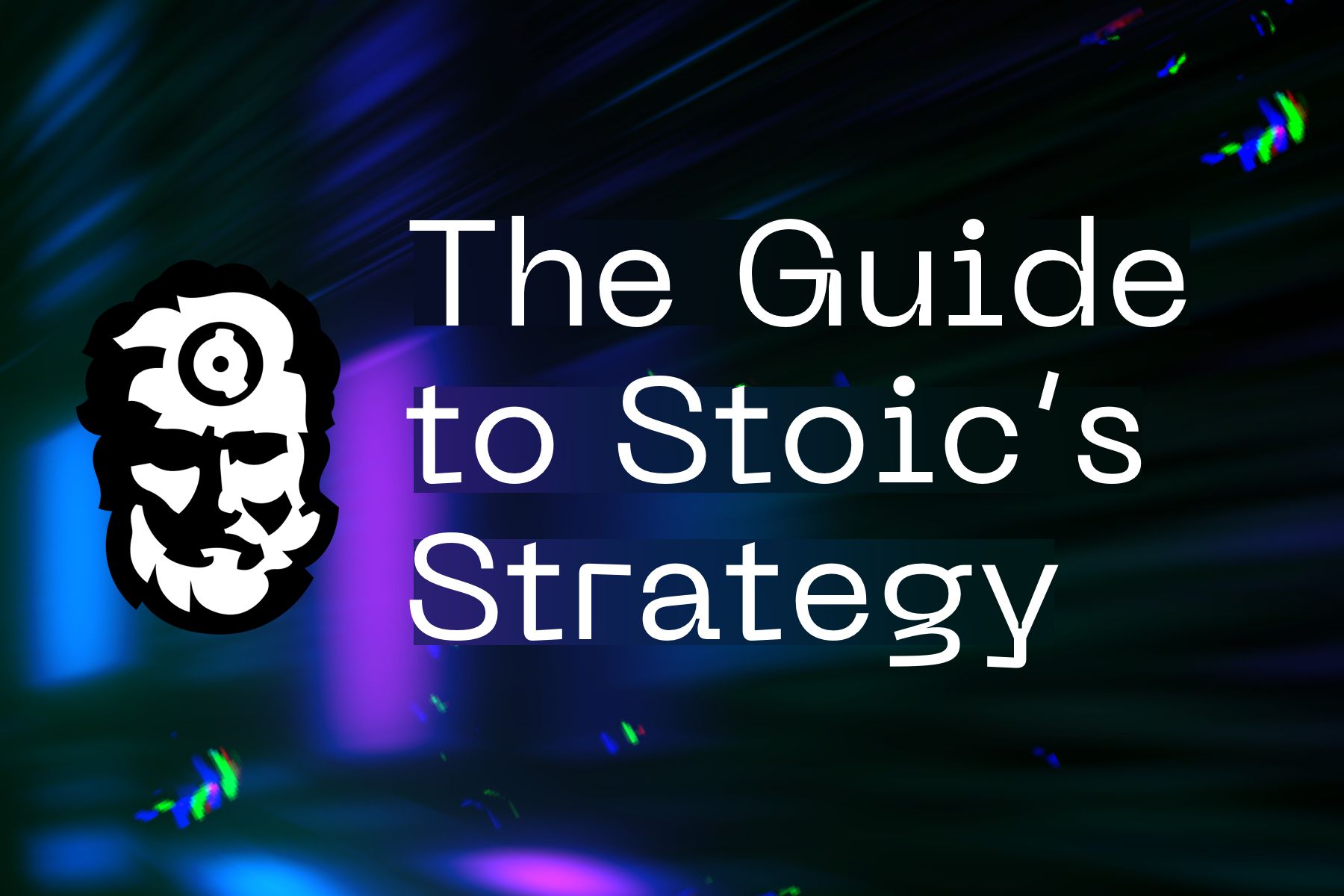 In its first 12 months, Stoic’s strategy made +2,193%, beating Bitcoin and other benchmarks. If you’re new to crypto, you might even think that this looks too good to be true.

There is no magic: Stoic’s long-only portfolio systematically takes advantage of the opportunities in the altcoins market. In this post, we’ll show how Stoics selects its portfolio, how it rebalances, reviews its performance and approach to risk management.

How Stoic Selects Assets for The Portfolio

At a high level, building an investment portfolio consists of answering two questions:

The optimal answers to these questions should achieve the maximum potential return with the lowest risk of drawdowns.

One time-tested approach that works in the stock market is to build a diversified portfolio that aims to replicate the market as a whole. Think the S&P 500.

The alternative is to try to follow the trends. This is known as momentum trading. The basic idea is to identify assets that are going up in price and are likely to continue to go up. Then sell these assets once the probability of further price increase is lower than the probability of a correction.

To find and exploit these trends, discretionary (i.e. manual) traders rely on their own skills and experience and algorithmic traders (including Stoic) rely on a system that uses mathematics and statistical techniques.

Here is how the process looks from a high level.

You can see that on any day, Stoic’s portfolio will include lots of different assets. Typically, a share of each asset is under 1%. The largest weighting would be 2-3%.

This means that a Stoic portfolio gives exposure to the broad altcoins market. It’s diversified: the risk of any crypto crashing balances out. Yet the portfolio is also likely to catch any moonshots.

Although Stoic has a purely mathematical approach to building a portfolio, many users still ask about specific assets.

Sometimes you might see some crypto shot up by 50% or more on some major news. Or maybe some hot token was listed on Binance or Coinbase. Or some crypto partnered with TikTok or whatever.

Stoic ignores all that noise.

Instead, Stoic looks at (1) capitalization to select weighting and then 2) evaluates the asset’s momentum to buy what’s going up and to sell what’s about to go down.

Furthermore, if you see crypto assets in the news, on Twitter, or among the top gainers on Coinmarketcap.com, this likely means that its price has already pumped — and in most cases it’s too late to buy them.

In any case, Stoic will algorithmically assess whether the price will continue to go up or down.

Why does Stoic hold (no) BTC or ETH?

Yet these two assets dominate market capitalization. And large-cap assets tend to underperform assets with smaller market caps. Assets that are already flushed with capital usually appreciate at slower rates than assets that are less capitalized. That’s a well-documented phenomenon in the stock market.

So Stoic gives preference to smaller assets that are more likely to deliver higher returns.

Yet Stoic’s job doesn’t stop at just building the portfolio — it also rebalances it daily.

Stoic executes trades via Cindicator’s proprietary trading platform. Originally, that platform was developed for Cindicator Capital, the team’s hedge fund. It has a number of built-in constraints (more on that below) to ensure optimal execution.

Stoic’s long-only portfolio is typically rebalanced once a day. Don’t expect to see a lot of trades on any given day, that’s not the point. In fact, overtrading is a common cause of underperformance — although your crypto exchange or stockbroker won’t tell you that.

Finally, daily rebalancing also means that Stoic won’t try to chase hyped up assets. Emotion-based trading is the opposite of what Stoic does.

How Stoic Works in a Bearish Market

Stoic’s portfolio strategy is best positioned for a bullish market.

As a long-only strategy, Stoic’s portfolio will fall during a market correction. Yet the strategy should cut losses quickly, decreasing the depth of the drawdown when compared to manual trading.

It’s important to understand that market corrections are inevitable. They are part of the price discovery process.

And volatility is what drives the returns. Early crypto investors (and even in 2021, anybody interested in crypto is still early) are paid to tolerate this volatility. If crypto had no volatility, no risks of double-digit crashes, then there would be no chances of making the gains.

To quote the ancient Stoics, you can think of volatility as an inescapable tax of life.

“Now, all the things which cause complaint or dread are like the taxes of life—things from which, you should never hope for an exemption or seek escape.”—Seneca

Still, to soften the blow of market sell-offs and buy crypto assets at discounts, Stoic holds some portion of its portfolio in USDT (a USD-pegged stablecoin) as a hedge.

The USDT hedge would decrease the overall drawdown of the portfolio. And should the market crash, Stoic would also use this money to buy assets at discounts.

How to set Stoic’s hedge?

The hedge function is also useful for withdrawing profits. Just set the percentage that you want to take out. Stoic will rebalance and you can just withdraw the USDT.

The hedge, however, is not a panic button: it won’t immediately sell everything. That would be the opposite of Stoic’s approach to smart crypto investing.

Any changes to Stoic’s hedge settings are applied within 24-48 hours. The USDT share is then increased in the next rebalancing round.

If this sounds complicated, don’t worry, you don’t have to make this decision. Most users rely on Stoic’s dynamic hedge, which fluctuates based on what the algorithm views as optimal.

When does Stoic’s dynamic hedge change?

Stoic’s hedge doesn’t change often, at most once in 2-3 weeks.

Usually, the dynamic hedge goes up after a prolonged bullish period. More and more new buyers need to enter the market for the prices to continue to go up. The market can’t go up forever without some correction. So Stoic takes some money off the market to protect against that.

And immediately after the sell-off, Stoic would decrease the dynamic hedge, possibly to 0%. This helps it to deploy that USDT to buy crypto at a discounted price and recoup previous losses faster.

Tip: if you’ve put Stoic at the zero hedge and the market crashed, you can add to your deposit and that would also help you to get better average entry prices.

The biggest risk in crypto is volatility.

Crypto is rife with uncertainty. Nobody knows how to fundamentally price crypto. Different cryptocurrencies compete among each other for capital, applications, and users. Regulations are still underdeveloped.

On the other hand, crypto is also full of optimism. Cryptocurrencies are natural protection from inflation that plagues fiat currencies. DeFi is a promising alternative to corrupt traditional banking. NFTs are attempting to revolutionize art, culture, gaming, and even property titles and other legal constructs.

As a result, the mood in crypto constantly shifts from fear to euphoria, causing wild price swings. And given lax regulation, these moves are amplified by excessive leverage (and waves of liquidations) and most likely even blatant market manipulations.

So in the medium term (up to 6 months), you should not plan on withdrawing profits or even what you have originally deposited to your crypto exchange account. A 10-40% drawdown in the crypto market is nothing new and should not come as a surprise.

On the other hand, in the long term (1-3 years), the crypto market looks very bullish.

Volatility is the risk that Stoic accepts as a price of future returns.

However, some risks could be reduced and Stoic’s algorithm and execution platform do that.

How Stoic Compares to Bitcoin and Equal-Weighted Crypto Portfolio

The goal of Stoic’s long-only portfolio is to offer returns that are superior to other cryptocurrency portfolios.

However, in any period, there would be some cryptocurrencies that would outperform Stoic by a large margin. This could even be Bitcoin or ETH — these assets typically appreciate before the rest of the crypto market. Of course, this is only clear if you’re looking backwards.

Since Stoic’s portfolio went live in March 2020 (there was even no mobile back then), it has outperformed Bitcoin and other benchmarks.

Note: the past returns do not guarantee that outperformance will continue.

Managing Your Risks: How Much to Allocate to Stoic

When and how much to put into an account managed by Stoic is your personal choice.

A traditional financial adviser would likely categorize this as an extremely risky investment. Their main argument would be that crypto is volatile. Yet we’ve discussed that it is a price of high potential returns.

Some Stoic users treat it as a call option or even a gamble: they’re expecting high returns akin to what Stoic delivered in the first half of 2021 but are ready to risk their full deposit. They put fairly small nominal amounts, which are probably large portions of their net worth.

These people are often nervous about weekly returns and get angry when things don’t go according to their expectations. But that doesn’t help.

“You shouldn’t give circumstances the power to rouse anger, for they don’t care at all.” — Marcus Aurelius

On the other hand, some users view Stoic as a smart passive investment, a beta play on the crypto market as a whole. Similar to an index fund that tracks the S&P 500 or Nasdaq 100.

These people want to be invested without spending too much time and emotion on doing manual rebalancing. These people regularly add to their deposits (especially during corrections) and don’t stress too much about weekly or even monthly returns. Their investment horizon is at least several years.

Again, it’s up to you to decide how to use the Stoic portfolio. It’s simply a tool.

Often, however, the biggest risk is no risk at all.

And with a $1,000 minimum starting balance, the Stoic portfolio is available to practically anybody.