What is an Altcoin? 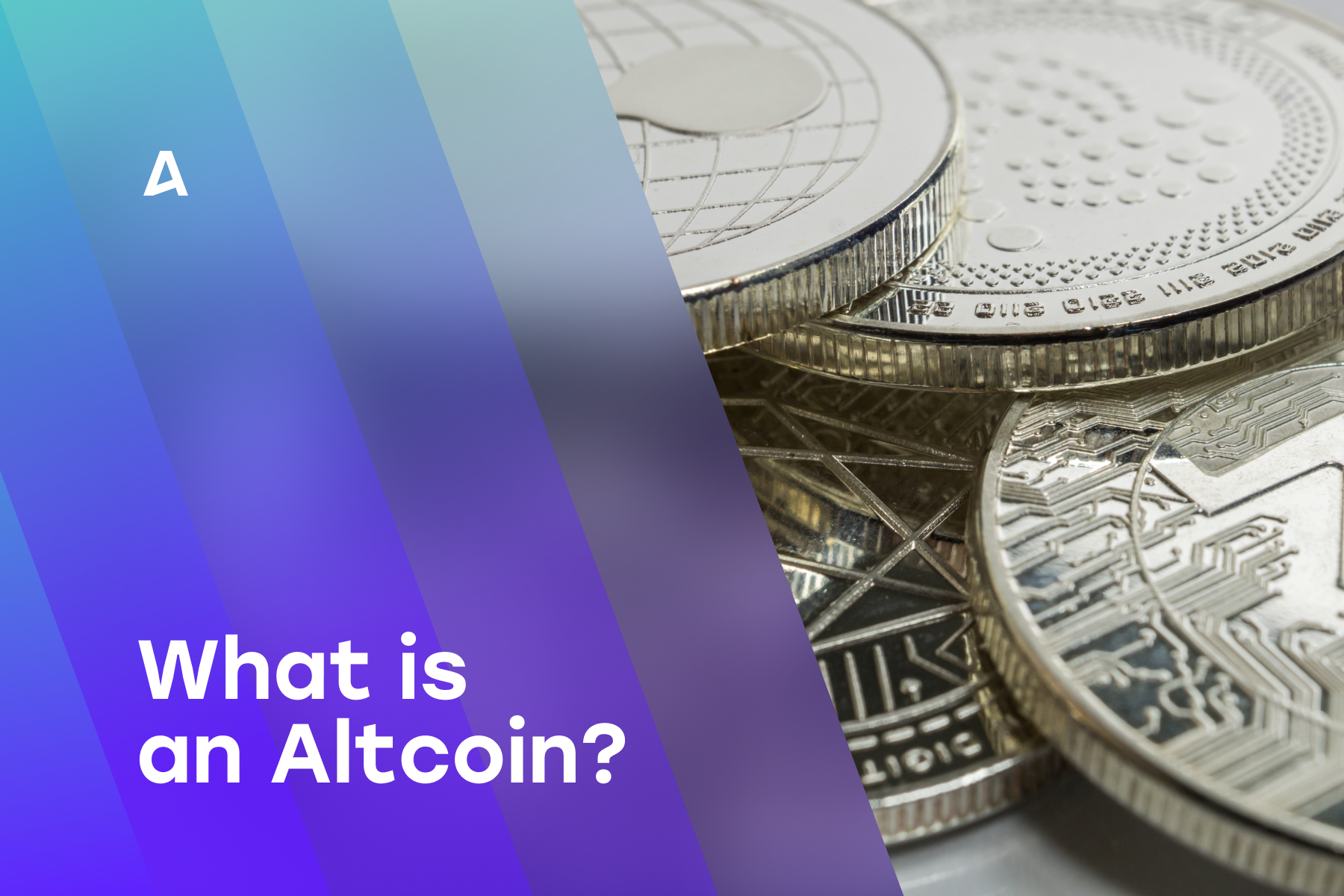 A basic understanding of altcoins and how they play a critical role in the crypto ecosystem.

An altcoin is simply any crypto asset that is not Bitcoin. To provide a more well-rounded understanding of what an altcoin is, you must look back towards the early days of cryptocurrency.

Some very brilliant people then began to work on their own cryptocurrencies. You’ve likely never heard of it, but in 2011 the second cryptocurrency, “Namecoin” was created. You can still use and mine Namecoin, although it never caught on.

Over the next 5 years, many new cryptocurrencies came to life. The most famous ones from that era are Ethereum, XRP, Stellar, Litecoin, Monero, and Dogecoin which still hold value today.

It may be a little odd that of the thousands of cryptocurrencies in existence today, all of them fit the label of “altcoin”. Bitcoin is the only crypto that is not an altcoin. It doesn’t make as much sense in 2023 as it did in 2015 or even 2017, but it still is used today.

Back in the crypto day

Most people who did not invest or trade cryptocurrencies prior to 2018-2019 don’t realize that it was incredibly difficult to buy anything other than Bitcoin, Litecoin, and Ethereum. In 2017, if you wanted to buy Bitcoin, Litecoin, or Ethereum, you simply needed to go on Coinbase, attach your bank account or debit card, and buy them.

However, in 2017, there were many other cryptocurrencies rapidly gaining popularity, namely XRP and Stellar, but also many others. To purchase any coin outside of the three Coinbase offered, you had to take extra steps. You first needed to buy bitcoin on Coinbase, then you needed to send that bitcoin to another exchange that offered these additional currencies.

You were then able to purchase these currencies with bitcoin, and also sell them back into bitcoin. The reason this was necessary was because these exchanges lacked the ability (legally and technically) to allow you to purchase these coins directly with US Dollars. As a result of this, Bitcoin truly was the “mothership” of the crypto economy.

If bitcoin crashed, every other cryptocurrency crashed ten times harder. If bitcoin went up 30%, your altcoins gained value in dollars, but lost value in bitcoin. As an entirely unregulated and new market, trading altcoins was a dangerous game.

If you’ve ever heard the term “alt season” thrown around the internet, this referred to times in the market where bitcoin remained stable, but altcoins saw gains upwards of 200-400%, sometimes even higher in a matter of days. This market dynamic is in large part why Bitcoin is in its own league, and even its number 2, Ethereum, is still considered an altcoin.

In 2023, Bitcoin still has a direct effect on the market despite the ability to buy hundreds of cryptocurrencies with US Dollars. This is both a lingering effect from the past, where bitcoin’s movement dictated the entire market, and because bitcoin sits on the proverbial cryptocurrency throne.

As the first cryptocurrency ever created, complemented by a robust network that has not seen even one second of interruption or downtime in its 13 years of existence, it has a deep trust and confidence. So much trust, that Bitcoin found itself in the top 10 most valuable assets worldwide by market cap, surpassing both Apple and Amazon at its peak. No asset in the history of the world has appreciated so intensely and so quickly.

All these various aspects are why bitcoin is the most owned and trusted cryptocurrency. It is also why all other coins in the crypto economy are referred to as an “altcoin”, as they are all alternatives to bitcoin. A popular belief is that in a few years, there will be some arguments whether or not Ethereum will shed the label of altcoin and join bitcoin on a shared throne. Still, even Ethereum has years before people view it on a similar level of respect and trust as bitcoin.

There are tens of thousands of different altcoins, and the market can quickly be overwhelming. A large percentage of these coins are worthless, ranging from overt scams, to memes, to good faith efforts that failed. The ones that have succeeded provide some fascinating use cases. Here are some examples:

Stellar (XLM) was created in 2015 and offered 100,000 free tokens via a public airdrop to anyone who wanted them (current value of those coins is around $10,000). Stellar has made a name for itself for being incredibly fast and cheap to transact with.

You could send $10,000,000 over the stellar network for $0.0001 and it will take under 10 seconds to complete a transaction. Stellar was created by a nonprofit seeking to “bank the unbanked” across the developing world, and recently absorbed MoneyGram (a remittance company) and is integrating the stellar network in all 400,000 locations worldwide.

To articulate the gravity of this, a sizable number of third world and developing countries get up to 20% of their GDP from remittances on MoneyGram. Stellar stays relatively low key and you don’t hear much about it in the news, but they’re making strong moves and are likely going to disrupt the estimated 400-billion-dollar remittance industry.

Filecoin is aiming to disrupt the cloud storage industry. Not only is Filecoin incredibly secure and your data stored on a blockchain rather than a centralized server, it’s also generally cheaper. The going rate for a terabyte of cloud storage on the Filecoin network is cheaper than a Dropbox or iCloud subscription.

Dogecoin started as a joke, yet it saw a massive increase in value on the heels of the GameStop squeeze. For many years, Dogecoin was simply the fun token that you could own 100,000 tokens for a few dollars. It didn’t hurt anyone or try to do anything other than simply exist as a meme in the form of a cryptocurrency. The biggest irony is that Dogecoin has a built-in inflationary system.

The supply of Dogecoin will inflate at a fixed rate year-over-year forever. A few years ago, this was the main reason it never was viewed to have much value, but after the inflation we are seeing worldwide that attitude might change. What’s a better form of money – a currency with a fixed rate of inflation that will never change, or the Argentinian peso? For context, the Argentinian Peso is currently hovering around 70% inflation year over year.

Cosmos (ATOM) is an interesting cryptocurrency. It’s one of the newer altcoins but has quickly gained popularity due to its token economic structure (tokenomics). You earn rewards for staking ATOM, but unlike other cryptocurrencies, the staking is much more customizable.

There are many staking pools to choose from, and each pool has a different “purpose” so to speak. For example, a popular staking pool is run by a foundation that donates 10% of all staking rewards to further research and innovation to protect individual privacy on the internet.

BAT is the native cryptocurrency for the Brave web browser. Brave browser is the most widely used cryptocurrency-adjacent product with over 50 million monthly active users. The internet advertising “click economy” is to blame for large tech companies owning a library’s worth of your personal information.

Most people are aware that their data is abused and sold by tech companies but think there is nothing they can do about it. Brave provides this solution. You still receive targeted advertisements on Brave, but your personal data is encrypted on the blockchain. So, when a handbag company purchases data on potential customers to advertise to, they don’t get anything except an encrypted identification.

The bonus? Users get paid 25% of the ad revenue for Ads they see online. This sounds sketchy, but it’s legit. It’s not a significant amount of money, but every month you get paid in BAT for the ads you view online. You’re using the internet for hours every day anyway, why not protect your data and make some pocket change at the same time?

Altcoins exist in many different shapes and sizes today as opposed to back in 2015. The crypto space has come a long way since then and continues to expand beyond original expectations.

We wonder if Satoshi Nakamoto had a vision like this for cryptocurrency? Time will tell how the ecosystem evolves as more innovation hits the scene. But, from the current vantage point, we are still sitting in the early stages of development.

The future looks bright for the altcoin market. Full steam ahead!