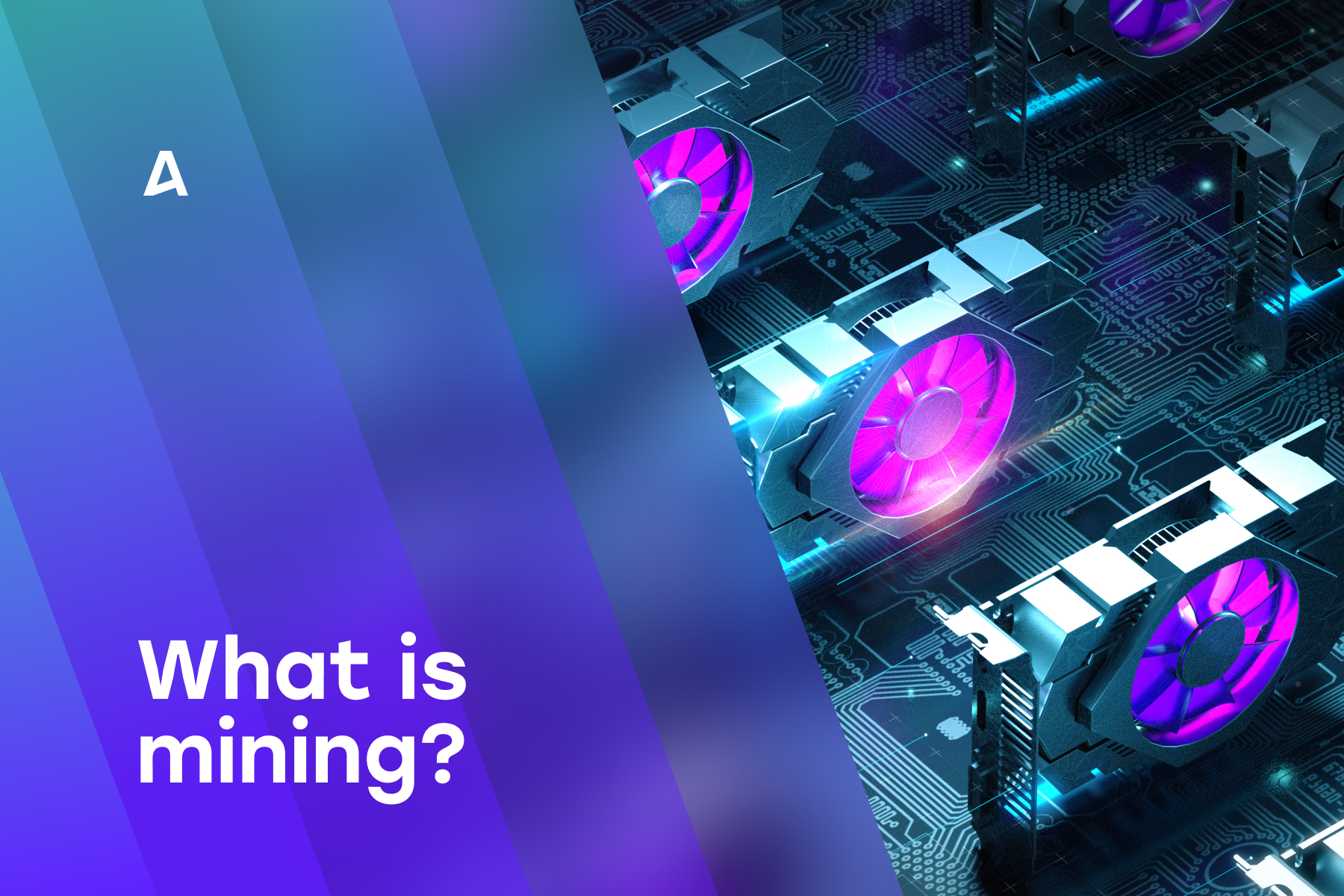 Obtain a basic understanding of mining and how it applies to cryptocurrencies.

Many people have heard the term Bitcoin before. Cryptocurrency mining though is a fairly technical topic which refers to the proof-of-work blockchain validation system. The validation of the network and the “mining” of new cryptocurrency tokens on the network are two sides of the same process.

To provide a clearer understanding, we will use Bitcoin as an example to describe the process of mining. Some background on Bitcoin will also be helpful and we will start there.

Purchasing a whole Bitcoin can be very expensive. The reason is simply a matter of supply and demand. The Bitcoin network was programmed with a hard number of 21 million bitcoin. There will never be more than 21 million that exist, and there’s estimates that around 3.7 million bitcoin is lost forever in lost wallets from the early days of bitcoin.

While there will always be 21 million bitcoin, the market supply is likely closer to 17-18 Million. The global population is around 8 billion people, and there isn’t even enough bitcoin for every person in the state of New York to own a bitcoin. People who are strong believers in the future of Bitcoin often cite these numbers to argue why the value will continue to increase over time.

While that might not seem relevant to mining, understanding the supply of bitcoin is helpful to understand how bitcoin (and other cryptocurrency) mining works. When a transaction on the bitcoin network is sent, it is placed in a block.

Approximately every ten minutes, a block is validated, and a new block is built on top of the previous block (think legos). When a block is confirmed, new bitcoin is released into the ecosystem to the miner on the network who validated the block. This process creates the blockchain.

It’s quite possible you are still unclear what bitcoin mining exactly is. If you reference the article that explains blockchain through an analogy (as shown below), you get 90% of the answer. If you combine the information provided above, you round out the full 100%.

To explain blockchain in an analogy, imagine 10 friends have a weekly bowling competition. At the end of each competition, all 10 participants make a record of who came in first, second, third place and so forth.

A year later, one friend claims he won the Christmas week bowling competition, but another disagrees and says he won that game. All 10 friends simply check their records and verify this claim. Turns out they were both wrong. Thankfully this information was verifiable by all 9 friends.

Imagine instead of all 10 friends independently verifying the outcome of each weekly competition, only one friend keeps track. What happens if his phone is broken or stolen? Or the computer where he keeps the information crashes? Now the group has no way to verify the outcomes. If they all keep track, there’s nine other sources of verification if one person loses the data.

Take the first method, but instead of 10 friends, now it is tens of millions of computers across the world. These computers work together to continuously verify every single transaction that occurs on a blockchain network and store a record of that transaction. While you often hear of hacks in the crypto world, these hacks are usually a result of human error.

The Bitcoin blockchain has been running nonstop for 14 years. The network has gone offline for 0 seconds, and every transaction ever made on the Bitcoin network is publicly accessible to view. The owners of these computers are rewarded for their services in bitcoin, this is what bitcoin “mining” is.

The concept outlined in the above analogy provides a more surface level understanding of Bitcoin mining, and now to bring it all together. With the background on Bitcoin supply and demand and a technical understanding of mining, this topic should be getting more familiar.

The big question remaining is, “why do people mine cryptocurrency?” The answer is simple, to earn money. Those tens of millions of computers mining bitcoin are working in sync with each other, but they are also competing. To validate a new block on the chain, a complex algorithm must be solved. These computers are, in a sense, racing to solve the algorithm the fastest. The computer that solves the algorithm is rewarded in bitcoin.

* The amount of bitcoin rewarded to the computer is cut in half every 4 years. When Bitcoin first went live, every 10 minutes the reward was 50 Bitcoin. In 2022 it is currently 6.25.

With that in mind, you can see that there’s programmatic scarcity in bitcoin over time, explaining the cyclical price increases.

If only 6.25 bitcoins are mined every 10 minutes, it might seem like a fool’s errand to mine bitcoin, but most bitcoin miners operate in pools, spreading the rewards evenly. Furthermore, bitcoin miners are paid transaction fees on the network for keeping the network running smoothly.

The fluid adjustment is what ensures mining remains fair and competitive regardless of external factors such as China banning mining, energy costs from the Ukraine war, or rolling blackouts in California. If there are computers mining bitcoin, the difficulty will adjust to maximize efficiency on the network and allow it to remain attractive to those investing in mining equipment.

There are many cryptocurrencies that utilize proof-of-work and are thus open to mine for a profit. While the fundamental concept is the same, each coin has unique attributes that differentiate them from Bitcoin.

Litecoin is the most similar coin to Bitcoin and is often referred to as Bitcoin’s little brother. Litecoin is almost identical to Bitcoin in its mining process, with the biggest difference in the supply of tokens. Litecoin has 4x as many tokens as bitcoin (84 million total). The increased supply generally allows Litecoin’s network to operate faster and cheaper than Bitcoin.

Monero is the go-to privacy coin. While bitcoin is pseudo anonymous, Monero has a robust privacy function that makes tracing Monero virtually impossible. While this is a great option for those living in oppressive countries or those who strongly value privacy, it also has become a hotbed for criminals to launder money.

Dogecoin is a popular coin as it is generally cheap to mine. However, Dogecoin’s supply will inflate at a fixed rate in perpetuity. Barring Elon Musk materially affecting the price via Twitter, Dogecoin may lose value over time as miners are incentivized to sell it.

How Does Blockchain Work?
PoW vs. PoS: Definitions and Key Differences
Intricacies of the Bitcoin Blockchain