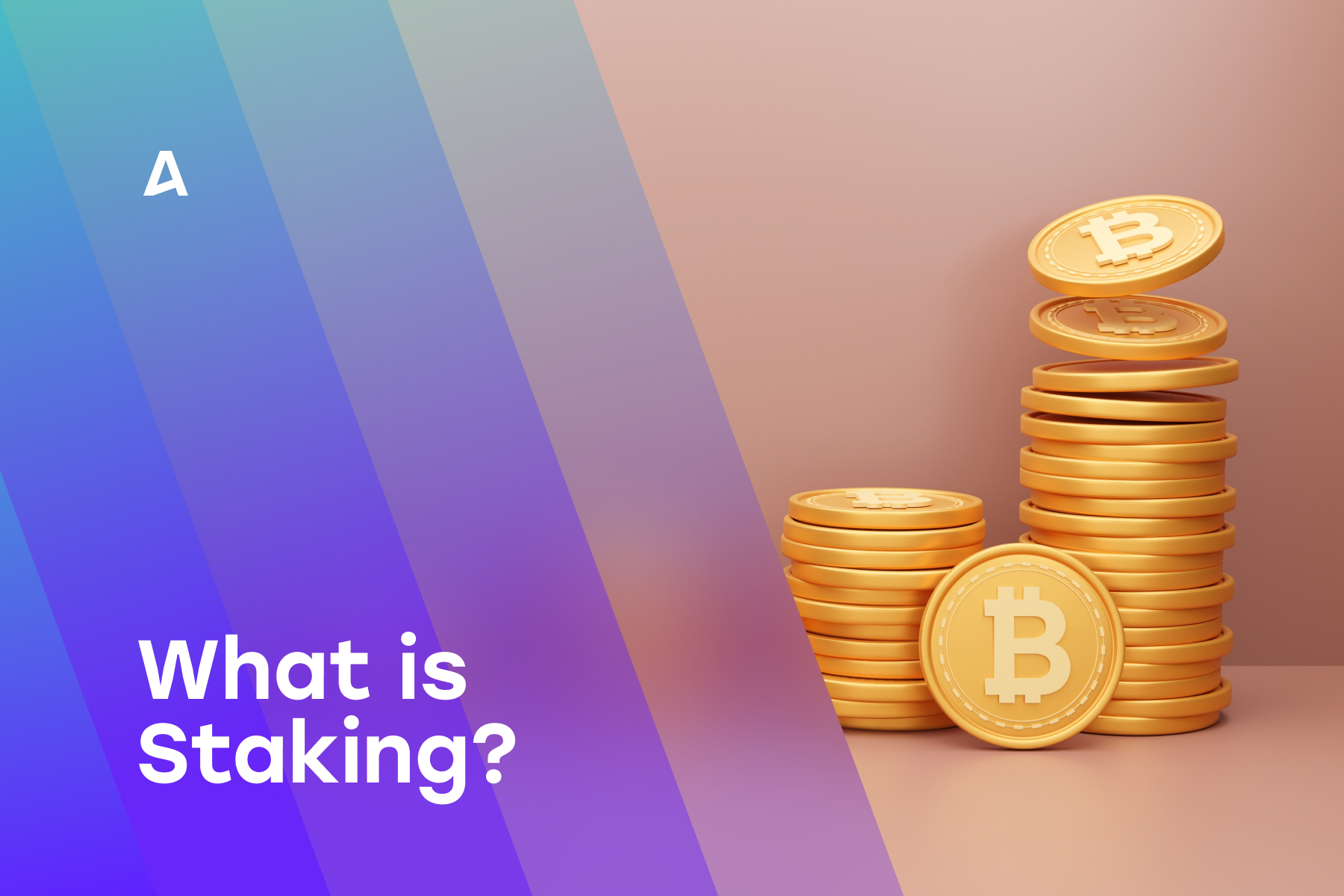 Discover what staking is and how it applies to blockchain, cryptocurrencies, and the future of Web3 technologies.

Cryptocurrency staking is an alternative method of validation to cryptocurrency mining. When Bitcoin was first created and the cryptocurrency industry was born, it used mining via computer processing power to validate transactions and “mine” new bitcoin into the network. This method is called proof-of-work.

Proof-of-work has become mildly controversial due to its energy consumption and effect on the environment. The energy topic is widely disputed by many within the crypto community.

A few years after cryptocurrency was born, a new method of validating transactions was conceived called, proof-of-stake. Proof-of-stake, or PoS, relies on token holders to “stake” their tokens for the blockchain to operate. Staking can take many forms, and some examples will be described a bit later.

When a token holder stakes their tokens, they designate their tokens to a validator to programmatically participate in the network validation process.

Staked tokens work together, similarly to computers mining via proof of work, to validate and secure all the transactions on the blockchain. In return for staking your tokens, you receive rewards similar to a stock dividend.

Essentially, all the transaction fees on the network are distributed to everyone staking their tokens. The more tokens you stake, generally the more rewards you receive.

Proof of stake has surged in popularity among new cryptocurrency protocols for various reasons. Namely, there is a lower barrier of entry for users to participate in validating the network and getting rewards (bitcoin mining equipment is very expensive).

Further, proof of stake has attractive perks like being environmentally friendly, versus the more energy intensive proof-of-work method. Ethereum moved from proof-of-work to proof-of-stake, one of the biggest events the crypto community has ever witnessed.

Proof-of-stake has had its share of bumps in the road. Prominent networks using the consensus mechanism have gone down in the past. While generally only for a few hours, downtime erodes trust in the network. A network outage may not seem like a big deal since Wi-Fi networks, websites, and apps all go down occasionally. Even the titans like Facebook have experienced an outage at one point or another.

However, proof-of-work has a shockingly robust history thus far. The bitcoin network has not experienced a single minute of downtime since it went live in 2009. Solana, being one of the most prominent blockchains, sent the entire cryptocurrency community into a slight panic, and the debates of centralized systems vs decentralized systems, and PoW network vs PoS systems, resurfaced again.

Cardano is one of the most successful cryptocurrencies, consistently in the top 10 by market cap over many years. Cardano is similar in functionality to Ethereum but uses a simple Proof of Stake validation process. To stake Cardano, you simply open your cryptocurrency wallet and delegate as many tokens as you choose to one of several “staking pools” available. You will pay a small transaction fee to enter the pool, and another later to leave.

You still have total control over your tokens (assuming you are staking through a self-custody wallet), so there is no increased risk to staking Cardano. The rewards you receive will depend on a few factors including (but not limited to) how many tokens are in the staking pool, and how many tokens you put in the pool.

Rewards are paid every five days and are automatically compounded to your current staking position. Depending on how much Cardano you own, this could be a nice passive income stream.

Algorand is a newer cryptocurrency built by highly intelligent people at M.I.T and has gained significant popularity due to its strong potential as a protocol. Algorand staking is much different than Cardano staking, and there’s technically two ways you can stake. The first way to stake is to simply own the token. By owning the token, you are automatically staking and earning rewards without doing any additional work.

Further, Algorand uses a governance system for system updates. When an update to the system is proposed, token holders can lock up their tokens for a period of three months, each token counts for one vote. At the end of the voting period, you are rewarded tokens.

Cosmos has a very interesting staking mechanism, albeit a little complicated. Anyone can create a pool to stake cosmos, but only the top 100 pools are generally considered safe (and pools drop in and out of the top 100 frequently). Each pool has a different level of risk, reward, and serves a unique purpose. Some pools are high-risk, high-reward.

Others are very safe but with relatively minimal rewards. Other pools are more purpose driven, such as a popular pool that donates 10% of its earnings to foundations dedicated to protecting internet privacy. Other pools may offer perks such as access to a private online community or access to new tokens that are being airdropped.

Staking is one of the best ways, especially for those new to crypto, to get involved in the space. For the most part, staking is very safe, easy to set up, and requires little monitoring. Many people have been staking cryptocurrencies for years, and despite the market volatility, can sometimes enjoy significant compound rewards and grow multiple new passive income streams.

*Note: Many centralized exchanges offer staking on proof-of-stake cryptocurrencies such as Cardano. We generally advise avoiding these for two reasons:

What is DeFi?
Stablecoins: How Do They Work?
Altcoin Types and Real-World Use Cases
Special Announcement: Our Proudest Achievement to Date – META Strategy Soft Launch!